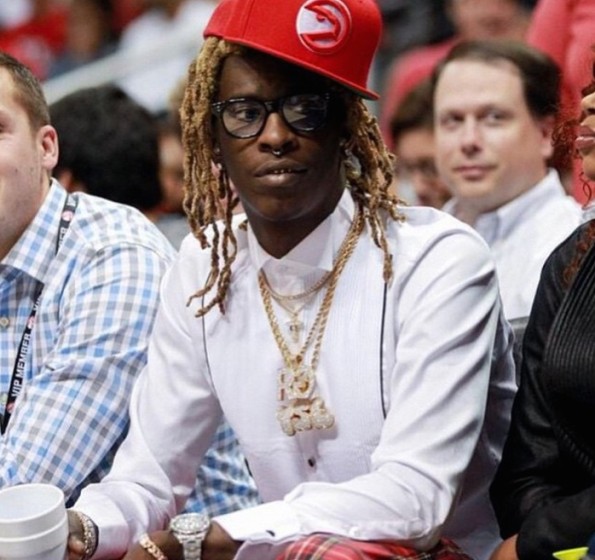 In a culture full of polarizing figures, Young Thug is probably the highest on the list in hip-hop. Between his voice, lyrical content and rumors questioning his sexuality, listeners have found plenty of reasons to hate Thugger. If you’ve ever peeped any of those wild ass comment sections on HotNewHipHop, YouTube, or other popular online media hubs, you already have a good idea of what the criticism looks like:

This installment of What They Sayin will highlight the most vitriolic criticism, but make a strong case for the unique value of Young Thug’s music.

“Young Thug isn’t trying to make the next Illmatic. He has been quoted as comparing Future to Tupac. Ask him who his three favorite rappers are and he’ll say Lil Wayne, Lil Wayne, and Lil Wayne. Like Weezy in the late 2000s, his deliveries are animated and eccentric, bringing idiosyncratic tempo shifts and melodic flourishes to futuristic Southern rap beats. That old-school boom-bap style doesn’t occupy a single cell in his body.” -Jacob Moore, Complex, “Young & Restless”

Hate him or love him, there are real reasons as to why Young Thug blew up. The strongest aspect of any of Young Thug’s hits is the creativity of the melodies. ‘Stoner’, ‘Lifestyle’, and ‘Danny Glover’ are only the more popular examples of Thugger’s ability to take his pitch, tone and delivery to a place that sits on the border between awkward and irresistible. His flows stick out much like his physical appearance does: Colored dreads, tall and lanky, a septum piercing, and with his fair share of odd pictures on his Instagram (nail polish, dresses, y’all know by now). Simply put, everything about Young Thug as an artist and an individual leaves a strong impression. It is virtually impossible to listen to a Young Thug track and not have a strong reaction, positive or negative, to what you just heard. His ability to be as outlandish on an instrumental as he appears in person is quite a feat. That isn’t to say all of his shit is on point, but his ability to give life to a tune is undeniable when he gets it right.

And now, a summary on the popular stances people take on the topic of Young Thug:

“This nigga weird, but I fuck with his music”

Many listeners agree that Young Thug is strange, but attest to his ability to make hits and support him despite the oddities of his persona.

These tweets summarize the feeling that many people who like Young Thug’s music share, mainly the acknowledgement of his hit-making ability but with a very vague sense as to how this guy’s songs are actually hits. As mentioned earlier, and supported by many critics, that “weird reason” as @BlazeTheGreat_ put it is his ability to go as far as he does in creating strange melodies that are somehow extremely compatible with the production coming out of Atlanta today. In particular, Young Thug has an impressive track record with London On Da Track and Metro Boomin (e.g. ‘Lifestyle’, ‘The Blanguage’, ‘About The Money’).

Of course not everyone has been won over by the young ATLien. The oddities of Thug’s music attract just as much hate as they do awe. No surprise that self-proclaimed hip-hop heads/purists are the strongest in their disgust, viewing Young Thug’s music as way too distant from any traditional aspect of hip-hop music to be considered a part of the genre. If Trap or Drill music didn’t already drive older hip-hop heads crazy, Young Thug has put many in a psych ward. The same melodies that many view as unique and catchy are unbearable to others and plenty of comedy has been made out of the next-level incoherence of some of his lines.

Along with his musical eccentricity, many people cite his reverence of Lil Wayne as disgraceful. Young Thug’s comments about possibly continuing the Carter album series once Wayne is done upset a whole bunch of people.

There’s a plethora of content  negative sentiment toward Young Thug everywhere online, so I’ll save space on this article and not bother y’all with samples.

Though he’s never been confirmed to be homosexual, Young Thug’s presence makes homophobia in hip-hop extremely visible. Many listeners who dislike Thug are convinced they don’t need any verification to assert that he is gay and insist to hate him for it.

But it’s not all negative. In fact, a significant amount of people have come out and thoughtfully questioned the implications of Young Thug’s self-presentation as well as challenging those who write him off simply for appearing gay.

My first experience listening to Young Thug was this song he did with Peewee Longway called ‘Loaded’. I saw Gucci tweet something about Bricksquad “putting the whole house behind” Young Thug or something like that, so I took a look. That shit was SO garbage to me. I couldn’t stand that song, but ‘Lifestyle’ and ‘Hookah’ gave me enough of a reason to do more investigation. After listening through ‘1017 Thug’ last fall I had a much more complete picture of Thug and though I didn’t like everything he had to offer, I was finally able to appreciate his unique skill set.

Fuck with him or not, Young Thug is stretching hip-hop culture’s boundaries in ways that no one has or may ever will. Both his music and persona have already left a mark on the hip-hop community and there can only be more to come in the near future now that he and the rest of Atlanta’s new roster of rookies on the rise have some momentum.