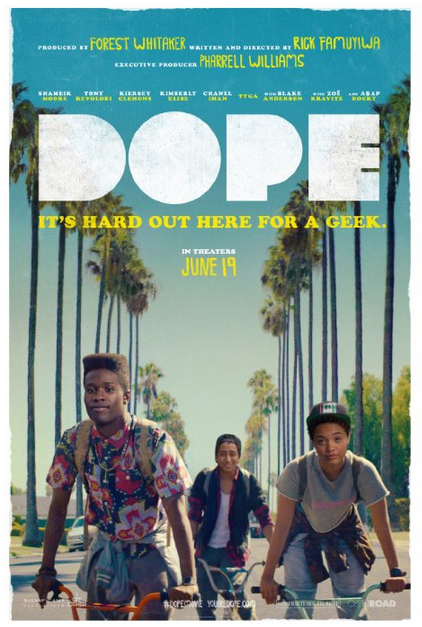 Revolving around a circus of coinciding storylines and Malcolm’s issues of self-understanding, Dope serves as a humorous representation of popular youth culture in 2015 and a thoughtful look into some of the more prevalent social issues among younger millennials. It’s a ridiculous hood comedy in the way ‘Friday’ is, but it carries a sense of urgency and seriousness that makes the film engaging and insightful while being hilarious. The film also touts a wide variety of characters that can genuinely resonate with non-Black viewers.

I like the way Dope addressed the social issues it chose to focus on. In a movie this funny, it can be easy to lose sight of a film’s motifs and overarching message. However, the humor in this movie was used effectively.

The scene with Jaleel in his home studio, for instance, gave the trio of out-of-place Inglewood friends a chance to clown the gang culture that has terrorized them for so long in a lighthearted way.

Then there’s the scene where Will tries convincing Malcolm and the gang that his use of the word ‘nigga’ is innocuous. The exchange got to the heart of the debate and felt very real. Not only did Blake Anderson’s presence make it feel like an authentically goofy Black-White culture clash, but his arguments and the reactions he got from Malcolm, Jib and Diggy (especially Diggy, lmao) were not difficult to imagine happening in today’s world. The motley group of friends seemed like they had to exist somewhere in today’s world, even if not smack dab in LA gang territory.

I love how the characters in the film make you rethink Blackness. You got hood niggas, nerdy niggas, niggas with 14 percent African ancestry, and light-skinned (mixed?) children with rich parents in the suburbs. They all have unique takes on Inglewood’s culture and to varying degrees, they all fit in. The film doesn’t present Malcolm and his friends as less Black or “Whitewashed”, rather different. Just different. As Nakia said, Malcolm is “not one of them niggas”.

Adding to that, I like how Malcolm never becomes “one of them niggas” throughout the film. Considering how successful him and his team became at movin’  Lily, the story could have easily seen Malcolm take a more drastic turn toward being someone like Dom and then experience an internal conflict about who he truly is. Aside from Nakia angrily storming off after Malcolm accuses her of espionage, Malcolm’s persona never seems conflicted or caught up in his successes or bad ass moments. Whether it’s his band blowing up after the show at the party, or punching Fidel in the face, Malcolm doesn’t revel in these accomplishments.

The true triumph in the story is over the limitations his surroundings place on him. It was cool to see Awreeoh turn the party out and to see Malcolm finesse AJ because it was Malcolm finally winning at being Malcolm, not necessarily evolving into something better. The film made our perspectives of Malcolm shift and change rather than Malcolm himself. The question “Who are you?” is directed at Malcolm a lot during the film, and his expression of self never really changes. His ordeals, however, prompt us to see him in a greater light by the time he’s giving his monologue at the end of the flick.

The conclusion makes this aim more obvious when he asks whether you would assume him to be a criminal or exceptional student based on his two persona profiles in his college application essay. In all of the film’s goofiness, I think this theme was explored in an entertaining, incisive way. ‘Entertaining’ and ‘incisive’ really describe the entire film to be frank. It was fun to watch, and Rick Famuyiwa should be proud of what is arguably his best directing work yet.