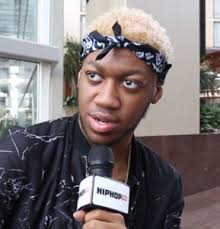 We all know how he blew up, but why should we continue to pay attention to OG Maco?

For one, ‘U Guessed It’ is not entirely representative of his discography. He certainly exhibits similar levels of energy throughout his work, but there is a greater diversity in his flows and song structures than people give him credit for. He has come out with enough material since the Give Em Hell EP (Tax Free, 15, OG Zay) to prove this. While it’s fair to have doubts about his longevity, it’s hard to argue with his output and forward progression.

More interesting to me, however, is the level of concern toward urban culture he has shown as of late.

In June, after Travis Scott dropped ‘3500 For The Coat’, Maco expressed his displeasure with Scott’s use of the Atlanta sound. He questioned why people were impressed by it and went on to discuss the importance of Atlanta’s music community to “draw the line” and support each other. He expressed all of this tastefully, mentioning that he is indeed a Travis Scott fan in order to quell accusations of hating. He ended the string of tweets with this:

One day the internet will learn the difference between peer criticism and hate. Until then, fuckem.

On July 9th, he let out a series of tweets criticizing the current state of hip-hop and its fans for being superficial, starting with—and basically summed up by—this one:

His comments do deserve some criticism, however. Despite a number of more conscious joints, the bulk of Mac’s lyrical content does not deviate from what you would expect to hear from a young rapper from the A. Also, suggesting Future is responsible for “ruining countless lives” is a statement that requires a larger discussion about drug use in hip-hop culture. To simply mention Future, or any popular hip-hop artist that talks about drug use, is to point out a symptom rather than the problem. But that’s another piece for another time.

The approach is spontaneous and a little brash, but it’s enlightening to see a young artist not only invested enough to begin thoughtful dialogues on matters in hip-hop culture, but mature (i.e. real) enough to call out his peers without invoking anything hateful or egoistic. To call the episodes with Future or Travis Scott “conflicts” is ridiculous. If anything, OG Maco’s comments have highlighted just how badly both fans and media want to sensationalize interactions between artists for the sake of good entertainment. He has pointed this out in the past, but insists on doing what he does in order to foster a culture of constructive criticism in hip-hop. One where artists feel obligated to speak on issues in the culture they help create in order to improve it.

It is unclear whether Maco’s recent efforts will inspire other artists to be more responsible with their content in the short-term. However, his actions carry significance in a time where it seems like most fans and artists don’t care about discussing the direction of hip-hop culture.