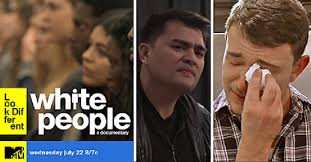 MTV is rolling out two new shows this month: White People and Uncommon Sense. White People, set to air on July 22, is a special on White teenagers confronting the reality of racism in America. Uncommon Sense, which debuted July 11th, is a show hosted by Charlamagne tha God which highlights popular Black Twitter personalities while discussing hot topics on social media.

There’s good reason to be skeptical here. One offering is a brief showcase of White people being agonized by having race issues shoved in their face, the other is coverage of trends and cultural phenomenon driven by Black people.

MTV has made recent attempts to contribute to the progression of America’s race conversation. A great thing on the surface, but there’s good reason to be suspicious of a large entertainment network getting serious about one of the nation’s most urgent social problems all of a sudden.

See, White People is a great idea for a special…in theory. If the preview is any indication as to what it will actually be, the conversation seems like a highlight tape of the best (worst) reactions to the discussions. Between shots of participants feeling “discriminated against”, and a tearful teen every several seconds or so, the special looks more like a Shame White People Fest than a constructive conversation meant to help White people understand the effects of racism in today’s world.

To be fair, the moderators of the discussion seem capable of making the dialogue fruitful. However, I still wonder how much of the entertaining reactions from these participants will be milked in an attempt to win the favor of certain demographics (i.e. Black viewers) rather than genuinely contribute to the larger discussion on race.

That being said, rolling White People out while the Black Twitter-oriented Uncommon Sense debuts looks very strategic. Given the recent attempts by other national media outlets to capitalize on Black Twitter, such as the LA Times, it doesn’t hurt to be skeptical when a network like MTV makes moves like this.