“We love you Bernie, but are you really saying Trump voters aren’t racist?”

I do not believe that most of the people who are thinking about voting for Mr. Trump are racist or sexist.

To many, Trump’s presidency signals a win for bigotry in the United States above all else. That racism, sexism, and other forms of discrimination are what people really voted for when they voted for Donald Trump. But perhaps Bernie Sanders is on to something.

It is not a secret: a significant majority of White voters voted for Donald Trump. It hurts. No one can gloss over the fact that Trump’s campaign has given a platform for bigotry to be mainstream again, and that White voters are largely responsible.

I think many non-Trump supporters fail to see the other key reasons for Donald Trump’s rise. Most of which have nothing to do with domestic racism or sexism.

Trump (58 percent) did not receive more of the White vote than Mitt Romney did in 2012 (59 percent). Democrats also lost a small yet significant chunk of both the Latino (71 percent to 65 percent) and Black vote (93 percent to 88 percent) between Obama’s 2012 campaign and Clinton’s 2016 campaign. Whereas Obama won over non-college grads in 2012 (51 percent), Trump commanded the non-college grad vote in this election (52 percent).

Independents mostly voted for Trump. People who did not decide on their presidential vote until the final week or month leaned toward Donald Trump. And people dissatisfied with the federal government (69 percent of CNN exit poll respondents) were overwhelmingly Team Trump. These demographics are not rising up to support Trump simply because they hate non-White people.

The people who struggled to decide which candidate was worse. The people who couldn’t stand Democrats or Republicans. The people who simply wanted to believe in something new. These are the people that Donald Trump outcompeted Hillary Clinton for. Like Suber, the Somali-American author of ‘Why I Agree With Trump‘, these are the people who’s concerns were better addressed by anti-system rhetoric than “I am not a foul human being” rhetoric. What people are failing to correctly put a value on is Trump’s appeal to the frustration of “the silent majority”. I’m certainly not the first one to say this.

In a Pew Research Center poll of roughly 1500 respondents conducted in July of this year, the four issues most frequently ranked as “Very important” are the following, in order from greatest to least: the economy, terrorism, foreign policy, and health care. 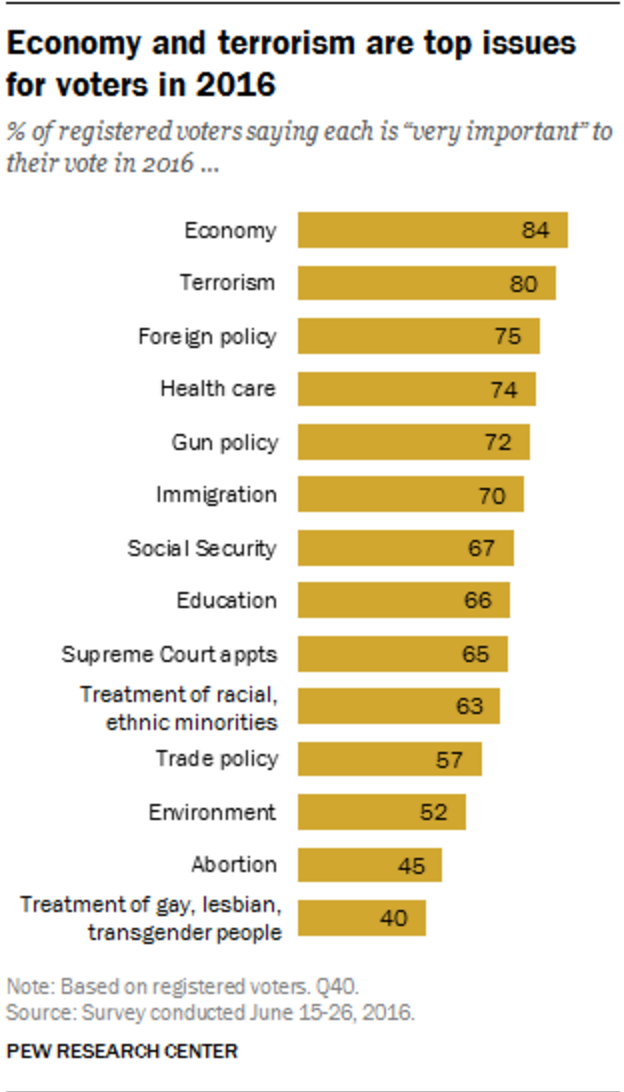 Immigration was the sixth most important issue to voters. Treatment of racial/ethnic minorities? The tenth most important issue. Environment and abortion? Twelfth and thirteenth. While Donald Trump spells trouble on all of those fronts, his campaign was a huge hit because his urgent talks about the evils of ISIS, offshoring, and Obamacare actually sooth fears that we, collectively as Americans, have. It’s just that “we” have not been keeping track of who “we” really are.

The reason why Bernie Sanders did so much better than Clinton in head-to-head primary polls against Trump is because he spoke to the same fears that Trump tapped into. Different preacher, same choir. As strange as it is to say, Donald Trump, like Bernie, was actually connecting with the people. It’s just that we put the -isms blanket on Trump’s supporters to the point where Hillary Clinton could confidently call nearly half of the the United States’ eligible voters deplorable. We made it okay to not take Trump voters seriously.

If you are a working class Latino voter hearing Donald Trump warn of rapist Mexican immigrants, there’s a chance your concern about manufacturing jobs and feeding your family might be greater than concern about Trump’s prejudice. If you’re a White man with no college degree, your fears of ISIS and America losing its jobs, no matter how irrational, might overcome the doubt you have about Trump’s statements on women and military veterans.

Trump’s appeal to racists is the obvious part of all of this. But despite the KKK celebrating his victory, Trump’s voters are not simply one massive hate group. They’re a group of confused, angry, and ignorant people who have been more directly catered to by Donald Trump than any presidential candidate in a very long time. Bernie Sanders, his only real competition for “the silent majority” voters, lost before he even got the chance to face him.

So no, Trump voters aren’t racist…for the most part. What these statistics say to me is Trump’s appeal carries a lot more validity than we like to admit. That maybe we need to hear exactly what’s ailing the people who voted for him. That maybe the fear of the future many Trump voters feel is about more than hating immigrants and saying Black lives don’t matter. If anything, maybe Trump has forced us to listen to people we’ve never tried to listen to.