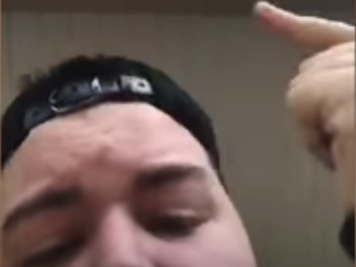 He’s not some producer on Twitter spamming your DM with beats. Actually, he might be one of the Internet’s brightest innovators—and one of the music industry’s worst nightmares.

Taz Taylor is a music producer known for Internet Money, a movement he spearheads with the goal of empowering producers on the Internet to commercialize their music without depending on beat placements from labels and publishers. Similarly successful Internet producers like mjNichols and TheBeatPlug are some of Taz’s closest peers.

Taz has been selling beats since the platform Soundclick was the place to be for producers looking to sell sounds. mjNichols had experience making what are called “type beats,” but took it to another level with Taz. Taylor likens himself to the mouthpiece of the Internet producer community who has consistently pushed for producer respect to the point where we have to acknowledge the innovation of Type beat producers.

If you’ve listened to a string of popular hip-hop tracks on YouTube, or wanted to hear a certain hip-hop instrumental but couldn’t find the official version of it, you probably know what Type beats are. 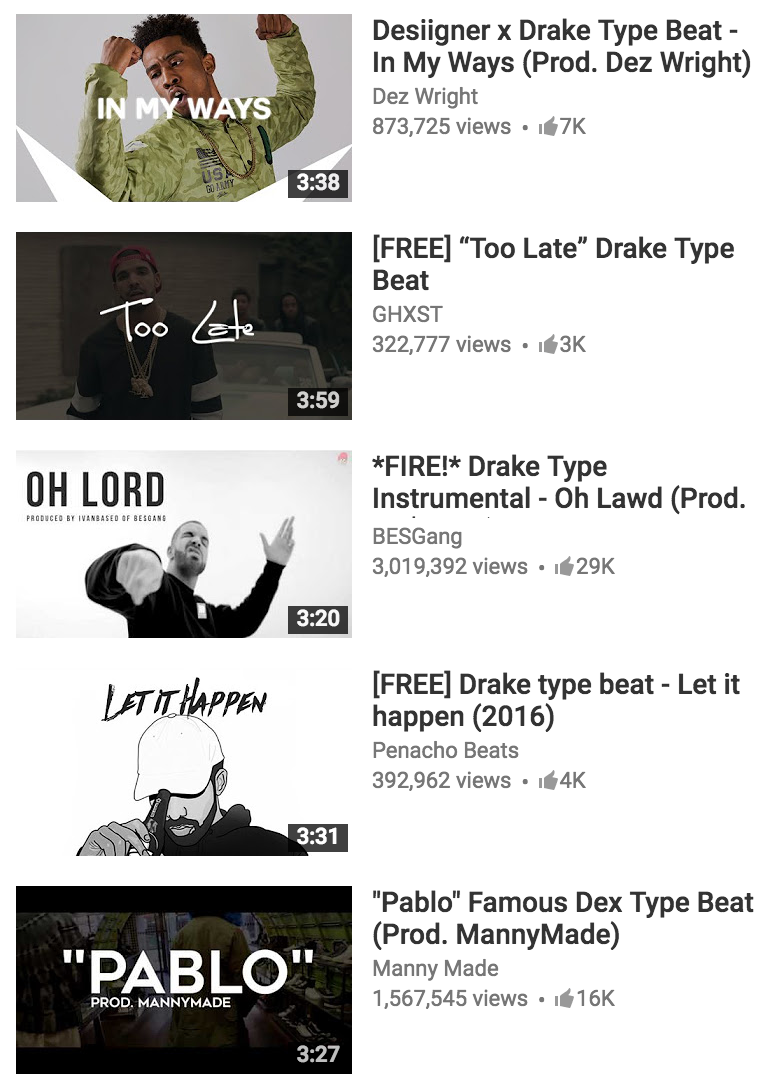 In fact, if you type in most of today’s popular hip-hop artists names, the first suggested search on YouTube is “____ type beat.”

This Type beats shit is huge.

Many producers create instrumentals with certain hip-hop artists in mind, and label them using the artist’s name as keywords to gain views, as well as to compare their unique sound to something that already exists. Though it looks like a corny ploy for more attention, many of these producers are creating quality, unique beats and can land placements without the help of a label. Innovative music marketing outside of the industry’s control.

“Panda” by Desiigner was the #1 song on the Billboard chart for two weeks straight in the spring of 2016, dethroning Rihanna and Drake’s “Work.” “Panda” stayed in the top-10 for 17 straight weeks. But where did the beat come from?

Taz often speaks out about the mistreatment of producers. When he isn’t pushing his product, he’s usually engaged in some kind of discussion about producers in the music industry: how they get placements, how they get paid, why Internet producers don’t get paid or respected enough, and the phenomenon of Type beats.

Note to producers; don’t be a “type beat” style producer….

Though he wasn’t the only one responding in defense of Type beat producers, Taz engaged him in a substantive debate and caught flack from notable Boston producer Statik Selektah, as well as popular YouTube tutorial beatmaker BusyWorksBeats.

On Monday, Taz live-streamed responses to the criticism on Periscope, along with passionate insight on why he so strongly advocates for Type beat producers.

In regards to Statik Selektah, who claimed Taz Taylor didn’t show 9th Wonder proper respect, he explained the debate as simply defending the reputation of Type beat producers from misinformation. He also cited his knowledge and status as a fan of 9th Wonder’s discography to prove that he, along with other Internet producers, truly study music production.

In regards to Busy Works Beats calling Type beat producers a “cancer” to the producer community, he countered by saying no one else is showing Internet producers how to actually make their own money. The clapbacks toward those two were vicious, but the substance was valid.

Through a quick Twitter DM chat with Taz, I was able to call and ask a few questions over the phone for more of his thoughts on the Internet producer community right after the live-stream. Here’s what he said regarding 9th Wonder’s comments:

“We don’t do that. We make beats that we like, then we get into a group and ask, “Who do you hear on this?” “Even Kanye, if you hear the ‘Last Call’ when he talks about Heart of the City, he was sitting there saying “I envisioned DMX on it.” He essentially did the same thing that we’re doing.”

Even more importantly, Taz explained to me, using popular artists as keywords for beats drives traffic toward them. It’s simply great Internet marketing. Many Type beat videos have well over 1 million views, and Desiigner isn’t the only rapper who looks to buy these beats for real recording purposes.

The sounds are original, and the marketing is clever. But according to Taz, misinformation about Type beat producers has led to industry figures like 9th Wonder looking down on the practice. This is what Taz fights against. “You’re not gonna hear an a capella on the radio,” he tells me. “Producers are as important as vocalists. We have a say in the final product.” And to Taz, having a say free of a label controlling you is the next step in raising the status of producers in the music industry.

Taz is well-connected in the industry, citing his placements with some of today’s biggest names in hip-hop (e.g. Kevin Gates, Trey Songz, Lil Kim), and his relationship with Grammy-nominated producers like Cardiak (“Diced Pineapples”) who respect his hustle. But seeing his peers not get the money they deserve from the industry has kept him from trying too hard to get those placements.

While criticizing the lack of genuine networking opportunities for producers at big music festivals like A3C and SXSW, he gave a detailed account of his friend Hutch, better known as The Martianz, producer of the Rae Sremmurd track ‘Came A Long Way’ off of their latest album SremmLife 2. The Martianz’ shitty experience after receiving a placement on Rae Srem’s album was an example of how up-and-coming producers get treated in the industry:

(On the live-stream): So you can be like Hutch? Who still ain’t got his money from the shit he did with Rae Sremmurd? And they can corner him to a thing and say, ‘If you don’t sign this fucking deal with Swae Lee and Rae Sremmurd that you ain’t gettin no fuckin’ money?’

(On the phone): The album came out September/October. They sent him a payment of $2500 that he has not received yet. I made 73 thousand dollars in July. We need to be valued more.

Update (11/10/2016): After speaking to The Martianz, this story has been deemed false. Complications with the transaction were due to logistical errors, not an intentional breach of contract. The Martianz had no further comment.

He followed this up with a story about how Birdman Zoe—manager of producer Ricky Racks (Young Thug’s “Best Friend”) and Menace, the producer of “Panda”—had a very difficult time getting the money he deserved for royalties from both ‘Panda’ and Kanye’s The Life of Pablo.

(On the phone): Menace’s manager, Birdman Zoe, hit me in my Twitter DMs. He said I was 100% right. He just got a 2 million dollar deal.

(On the live-stream): Homeboy that fucking did the “Panda” beat made 2 million off the beat. Everybody is like, “See, there is money in the industry.” They didn’t wanna tell y’all that Kanye didn’t wanna pay for the beat. That he tried to threaten him, and say he was going to get Mike Dean to recreate the beat. They don’t tell you it was a long ass process. Bruh got paid in like April, it was a long ass process. They just wanna think there’s still money. Bruh almost DIDN’T get money for that shit.

Y’all wanna talk about the real problems in the producer community? Ain’t muthafuckas like me really speaking out because they’re afraid of getting fucking blackballed. They’re afraid people ain’t gonna fuck with them anymore because all they rely on is beat money.

Through all the drama, Taz Taylor just wants to put Internet Money on. Clearly, what producers on the Internet are doing is viable enough for vocalists to invest their time and money into. Clearly, Type beats have become competition to labels, who have been caught trying to squeeze as much product out of producers for as little money as possible. Clearly, Internet producers are important. And he’s the most vocal about this truth.

“The Internet is the heart of this shit,” Taz tells me with the same high level of passion he’s maintained throughout our conversation. “Internet producers are the heart of fucking everything.”

The next time you see a “Drake type beat,” maybe you won’t scoff at it. Maybe you’ll look at Type beats and think, “Wow, a revolution.” And if you do think that, you’re probably right. The Internet is about doing it yourself. The Internet is about making it easier to make shit and have control over it. If these talented producers have to throw Future or Young Thug’s name on a video just to get more people to check out their work, can we really hate? At the end of the day, Taz Taylor is changing the music game for producers in a great way.