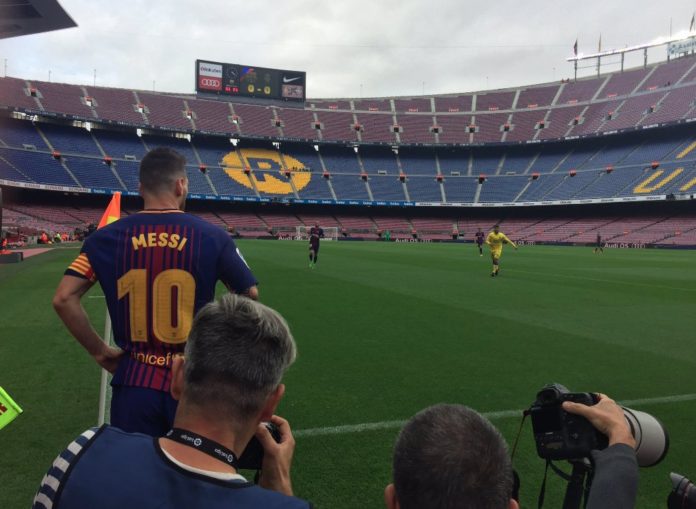 Camp Nou seats nearly 100,000. That makes it the largest soccer stadium in Europe, and the second largest in the world. FC Barcelona, current La Liga leaders and perennial Champions League giants, fill more than 60,000 of those seats during an average Spanish league home game. Yesterday, they played in front of no one.

The contrived political stances and sugar-coated social justice discourse of the NFL is nothing like the connection a city’s football club has to its community. European football leagues are big (as fuck) money, but not nearly the cold corporate machines that professional sports leagues in the States are.

A local football club represents their supporters. Diehard takes on a whole new meaning when you realize local fans wait years, sometimes decades, to see their clubs claw their way out of Division 2 or 3 play to make it back to their nation’s top flight. Look at Leicester City, or the recent Premier League addition 45 years in the making, Huddersfield Town.

The culture of club-community bonds holds true across all of international football. Even clubs so rich they forgot the definition of ‘relegation’ cannot transcend having a local flavor, being the center of their community’s vibe rather than a shiny escape from it. The flair and theater of French football is embodied in PSG’s stars, with internationals like Neymar and Cavani fitting the description even better than the best Frenchmen. Ronaldo’s reign at Real Madrid perfectly captures the regal, time-honored feel of Spanish soccer, along with the exciting young Spanish talent Madrid is so committed to pumping out. And then there’s Barça…

Yes, they play in Spain. The players all speak Spanish, they play Spaniards, but they’re just…different. Between its history of magically creative football and the Spanish-but-not-quite-Spanish names of their legendary homegrown talent (e.g. Xavi, Puyol, Guardiola), a deeper look at what Barcelona is made of will tell you that it is a club, a community, a culture, that clearly has its own traditions. Its own way of doing things that stretches far beyond the history of the team and tells a story about a region that’s always been independent at heart.

I won’t make this a lecture. Just know that Catalonia, the northeast region of Spain that Barcelona sits in, has never quite been one with Spain. The region has its own language (Catalan), and has managed to maintain its autonomy after hundreds of years as part of Spain. Catalonia kept its reputation as a nation and reinstated its own parliament in the 1980s after nearly forty years of suppression under Spanish dictator Francisco Franco. Once pro-independence parties took parliament by storm, it didn’t take long to set the process in motion in 2015.

Here we are two years later, the moment for Catalans to vote for or against their independence ruined by a wave of Spanish state violence. As Catalans were beaten and dragged from voting stations by riot police, the debate over the validity of the referendum got hotter. Not only is it doubtful that Catalonia’s unilateral claim of independence will be respected worldwide, but it is unclear if nationalist frenzy is truly the answer to the social and economic woes young people across Spain have been suffering from lately.

Amidst all this confusion, FC Barcelona pleaded to postpone their Sunday match against Las Palmas in an attempt to acknowledge the chaos their fans were going through. Instead, they were threatened with a six-point penalty and made to play behind closed doors, a safety measure to keep the madness outside.

Whereas Colin Kaepernick was a glorious exception in the NFL, soccer players and clubs do not hesitate to take political stances when its clear a social issue affects their club, region, or nation. Long-time Barcelona defender Gerard Pique expressed a willingness to be left off of the Spanish national team if the staff deemed his pro-Catalonia stance problematic. That would mean missing out on the 2018 World Cup. Las Palmas, Barça’s opponent in the vacant Camp Nou game, took a strong stand for Spanish unity in the form of Spanish flags placed on every player’s jersey. Las Palmas also released a weighty statement attempting to balance their desire to keep Spain together while recognizing the Catalan struggle. Here’s the last part of it:

And however complex the situation may be, we will always rely on simplifying it to better understand and find solutions.

Today, what we do is very simple.

With the Spanish flag embroidered in our kit we want to vote unequivocally in an imaginary consultation that nobody has summoned us: we believe in the unity of Spain.

We do it to tell the world that we feel pain for what is happening.

We do this by trusting that no one will be bothered by this gesture.

As we were never bothered by seeing you waving your flags in the stands, stretching them out on the grass or wrapping them around our rivals’ bodies.

Once the match is over, they are compatriots who fill us with pride when they are part of one of the best teams in the world.

These athletes and front offices understand what it means to represent a club and to be part of its community. No player is big enough or allowed to be distant enough to avoid the mood of a club’s community because the club is the community.

The international football community is not perfect (i.e. still hella racism), but there’s a level of social responsiveness—not just awareness—in international football that encourages me as an American sports fan. Even if this latest showing of sports being woven into society’s tapestry doesn’t inspire my country’s domestic leagues yet, at least I know good examples exist in the world.

I wish peace upon Spain, and I hope the conversation of Catalan independence can be guided toward something more productive.