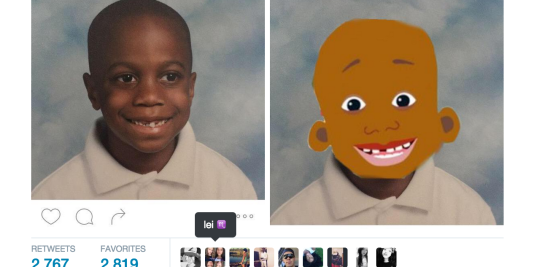 The diversity of techniques and roast patterns was overwhelming.

There’s something about lookin-ass jokes in particular that are so damaging.

First off, uncovering a person’s uncanny resemblance to something or someone is always funny. Even if the comparison is a favorable one, the fact that you can point out someone’s look somewhere else is entertaining.

Thing is, it’s not all fun and games in a roast session.

Lookin-ass roasts can do serious damage if the resemblance is an unfavorable one, or one that no one can see coming. The roaster can potentially strip you of your identity if the court of public opinion finds that, for instance, you are indeed a Squirtle lookin-ass nigga like this unfortunate soul here.

Civilian casualties like this are not uncommon on the range of platforms we call the realm of social media. It’s a Black-influenced communal aspect of social media, namely Twitter, that can feel as hectic and fun as a lively public high school cafeteria. On the flip side, it can be damaging if someone’s misfortune gets dragged out enough to become a trend (i.e. Sharkeisha’s victim, Amber Cole).

The best of Twitter humor can be innocently fun and obscenely petty. It’s this spectrum that makes pages like Best Roast representative of this special brand of generational comedy. It might get ugly, but beautiful forms of comedy such as the lookin-ass roast can always be appreciated.