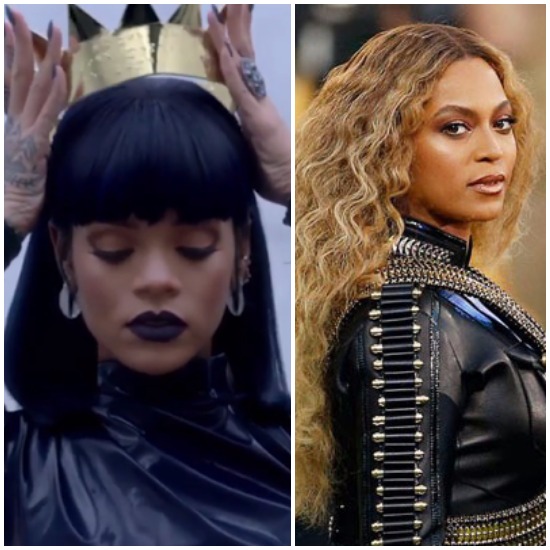 The following evaluation draws from an analysis of data compiled on Wikipedia’s ‘List of best-selling music artists’ page, as well as Wikipedia’s pages for the discographies of Rihanna and Beyoncé.

All three pages cite many credible primary sources including Billboard, Spin Magazine, the RIAA Database, AllMusic, and recording industry databases of dozens of countries including Australia, Denmark, Japan, Poland, and Sweden. The following are links to each page:

You probably have some names in mind off the top of your head: Michael Jackson, Madonna, The Beatles, whatever. And out of today’s more active artists, you’re probably thinking, “Yeah, I’m sure Beyoncé is stomping on the heads of Mariah Carey and Whitney Houston on her way to the top-10.”

Well slooow down there. Here’s some perspective for you:

For the sake of fairness, let’s also consider the numbers Destiny’s Child put up in the case of Beyoncé’s record sales. The trio sold 60 million records off of four studio albums. Being the leader of the group, let’s call it fair to add those four albums and 60 million records to Beyoncé’s tally (160 million records, 10 albums). Still, surprisingly, Rihanna has her soundly beat in records sold with fewer albums.

How? Why? Does it matter?

Let’s try to put these numbers in context.

For starters, “records” include sales and downloads of singles, albums, and music videos. Selling a single is a “record” sale as much as selling an album is. In the streaming age, Billboard and the RIAA agree 150 streams of a single equates to a record sale. For albums, the equivalent number of streams depends on how they were paid for. Subscription-supported streams (i.e. you pay Spotify) count more than ad-supported (i.e. free) streams.

Tracking down each sale of a single or album, even in the age of algorithms, is difficult and contains a margin of error. This is why the “Claimed sales” category on Wikipedia’s list has much different numbers than the “Total available certified units” category.

The impact of digitally-consumed music has made sales claims more accurate over the years. For instance, the claimed sales of Madonna, Elton John, and Led Zeppelin are all at least 100 million records higher than the total certified units for each act:

But look at the claimed-to-certified ratio of artists who started releasing records in the 2000s, and it’s clear that the estimates are more accurate. Katy Perry, Bruno Mars, and Adele all have claimed sales estimates within 20 million of the total certified units each artist has:

This realization makes the splits between the solo sales of Rihanna and Beyoncé even more eye-opening:

But, but…Rihanna really got it like that on Beyoncé? What explanation is there for this other than Rihanna just has more of the juice than we thought?

While Beyoncé has the kind of star-power to overshadow acts as big as Coldplay and Bruno Mars at the Super Bowl—and even Rihanna herself on her special night at this year’s MTV VMAs—Rihanna has had a pop focus to her music for much longer. An article on Rolling Stone comparing the trajectories of the two in 2011 provided a lot of insight into each artist’s direction.

Rihanna and Beyoncé are known to make songs for the club, but the pop/dance lane has defined Rihanna significantly more than it has Beyoncé. This is especially true when you consider the number of singles, as well as the types of singles, Rihanna has topped the charts with. Rihanna has an overwhelming 32 RIAA-certified platinum singles in her career, while Beyoncé has a relatively modest 12. In fact, Rihanna has more singles that are triple-platinum or greater than Beyoncé has platinum singles (14). She’s the only artist ever with more than 100 million RIAA-certified singles sold, and it weighs heavily in her total sales.

As said in the aforementioned Rolling Stone article, Beyoncé has always shown more of a focus on cohesive projects than chart-toppers. Her 2011 release 4 was a noticeable departure from any obvious attempts at dominating the charts, with one single meeting lukewarm critical reception (“Run The World”), and another being an R&B ballad (“Best Thing I Never Had”). Simply put, Beyoncé hasn’t cared to take advantage of digital music consumption for as long or as aggressively as Rihanna has. The trade off has been better albums and a stronger reputation as an artist.

Since 4, each successive Beyoncé album has been met with greater critical reception. Her most recent work Lemonade was one of the biggest snubs in GRAMMYs history for Album of the Year (as admitted by Adele), was nominated for multiple Emmys, and did it all without a top-5 single. Her evolution has been phenomenal. The trade-off of this evolution is that her content has stopped being tailored to compete with easy-to-spin records like “We Found Love,” “Don’t Stop The Music,” or “This Is What You Came For.”

It also helps to note that Rihanna’s rise into pop stardom coincided with the rise of digital music consumption. Whereas many of Beyoncé’s early attempts at chart dominance happened with Destiny’s Child and the early 2000s, pretty much all of Rihanna’s singles have been immediately available on popular streaming and/or digital sales platforms.

The power of online music platforms plus Rihanna’s reach into the dance/electro-pop world casts her net a lot wider when it comes to the influence of her singles. In an era of rabid digital consumption, having people play just a couple of your songs from an album on repeat, or racking up numbers selling that one single on iTunes goes a long way in making an artist a commercially powerhouse.

So really Beyoncé is better…right?

As discussed in my article on the Drake-Kendrick Lamar and Michael Jackson-Prince rivalries, mass appeal carries more weight in the evaluation of an artist than people like to admit. But unlike those two rivalries, the respective star powers of Rihanna and Beyoncé are on the same playing field.

Comparing Rihanna and Beyoncé is always fun. Two female artists with the magnitudes of Rihanna and Beyoncé coexisting is bound to make people pit them against each other. But for as much as there is to compare, there’s a lot about their paths to reconsider.

For one, Beyoncé has been on the scene for a while longer. Setting out on a more personally fulfilling journey with her music is something she can safely do given the stripes she’s earned with Destiny’s Child and her first few albums. In defense of Rihanna’s lack of critical acclaim relative to Beyoncé, ANTI was her strongest attempt at not making music for the radio, an even better effort than Rated R (credit to commenter Jeremiah). Where many might have seen ANTI‘s lack of successful singles as a letdown—though “Work” topped the charts—Rihanna’s current situation isn’t unlike Beyoncé’s leading up to Lemonade.

It’s hard to tell if any artist of this generation will mean as much socially as Beyoncé. But off the strength of the bold and daring ANTI, along with the new heights and lifestyle she’s seeing as the Fenty boss, it wouldn’t be surprising to see Rihanna add much more to her musical reputation. Folks been ready for more.

UPDATE (7/6/2019): I’m almost certain Beyoncé is sitting on an updated sales number we haven’t gotten yet. The difference of 150 million is based on claimed sales as they stand. Whatever the number is, the point remains: Rih is a much more dominant commercial force in music than many fans think.

UPDATE (3/2/2020): An earlier version of this article incorrectly stated Beyoncé has released 7 solo studio albums. The statement has been corrected to say she has 6 solo albums.