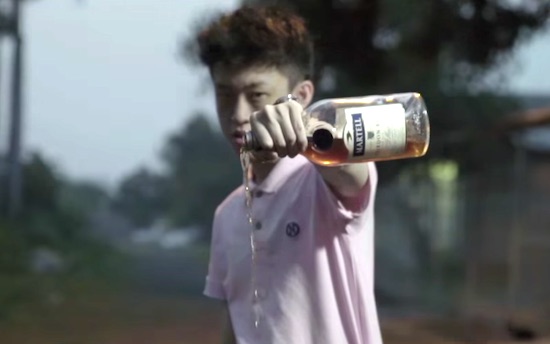 And mainstream hip-hop is much too easy to replicate.

Genres do have norms in tempo, sounds, and themes. But making hits in hip-hop is more than following the norm. It’s cookie-cutter. And whoever has the most colorful sprinkles on their shit gets eaten in the moment.

And that brings me to the phenomena of unlikely characters creating seemingly legit hip-hop sounds that go viral.

The copy-and-paste feel of hip-hop is not reserved to its viral acts. Many talented emerging artists are hard to distinguish stylistically. What’s important is that some of an act’s personality can shine through the template they use.

Ever heard ‘Wrist’ by Father? The sound and the themes are familiar to any fan of southern hip-hop. But with lines like, “Never had to whip a brick, but I get the gist,” his spin on the style was made convincing. Because that’s all you have to do, get the gist of it!

Then there’s the slew of artists born out of Drake’s Take Care sound that can be difficult to distinguish. As good as PartyNextDoor and Bryson Tiller have proven themselves to be, slow tempos, sing-rapping, and going back and forth between, “Ahhh, bitches,” and, “I need YOU thoooough,” make their musical identities difficult to distinguish by listeners who don’t avidly consume today’s hip-hop and R&B.

But then there’s shit like Slim Jesus’ ‘Drill Time’, an attempt at shapeshifting into G Herbo (aka Lil Herb).

Rich Chigga, real name Brian Imanuel, is a 16-year-old homeschooled Indonesian kid. According to this interview done by Hypetrak, he has never even set foot in the United States. He also has a background in Vine comedy.

Prior to that information, I didn’t know whether or not to be frustrated with the video. Now I can fully appreciate it for the cultural phenomena that it is. It would also be a lot easier if the song wasn’t hot.

Is this a good thing for hip-hop’s global presence? That themes and experiences unique to inner-city Black Americans can be performed so convincingly by people who have never lived them?

The thing about performing popular styles of hip-hop as someone like Slim Jesus or Rich Chigga is that authenticity in hip-hop is supposed to matter.

However, authenticity in mainstream hip-hop doesn’t seem to mean much at all these days. An admittedly non-violent White boy from Ohio doing Drill music, along with a fanny-pack wearing Indonesian kid going viral, is telling us that.

But is it a problem? Is hip-hop’s accessibility to the world ultimately a good thing?

Well, yes. But fuck all that.

You shouldn’t be able to outdo an artist with two #1 albums by plugging words into said artist’s (*cough* Future’s) 4-year-old formula. I’m looking at you, Desiigner.

Was it important that you had broads specifically in Atlanta? Why? Your hometown of Brooklyn wasn’t good enough?

What I hate about ‘Panda’ is that Desiigner wasn’t in it. The song tells me nothing about Desiigner. The creative process was based on his answers to the question “What would Future do?”

Much like ‘Dat Stick’ doesn’t tell me anything about Rich Chigga.

And that’s what I hate about copy-paste rapping. It is offensive how blatant it is that the artist’s work is not the artist’s experience.

But maybe hip-hop, as a large, breathing body of culture, doesn’t care enough anymore. Maybe it has become familiar with these viral particles (see what I did there?) that once threatened the organism’s life. Maybe it doesn’t need to care.

I think it says something very important that popular narratives in hip-hop have become so overwhelmingly familiar to the world. It says people are listening.

But left unchallenged, those popular narratives will be the only narratives. It’s not good for the perception of the culture or of Black men. And it certainly doesn’t encourage people of other social and cultural backgrounds to add to hip-hop while being true to themselves. And assuming that’s still something people want to see, I’m not sure we can rely on a handful of exceptional artists to change that.

So is it a problem? *shoulder shrug* Shit, you tell me.