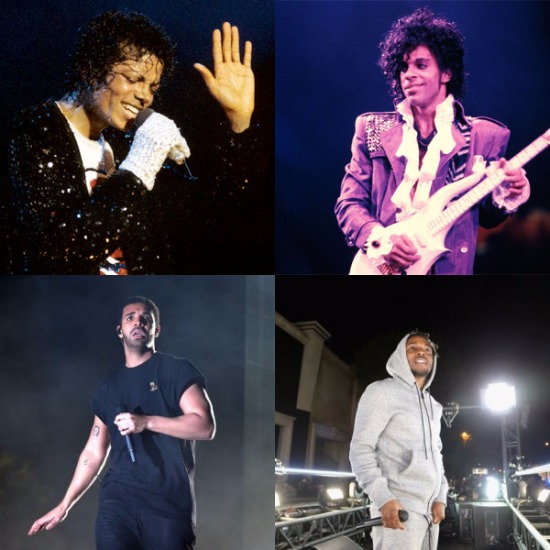 To many, it’s a shame that mass appeal gives some artists more fame than true artistry. But in the music industry, the effects of someone’s music tend to mean more than the craftsmanship behind it.

It’s not the most ridiculous claim if you compare Drake and Kendrick Lamar. We can also take a look back at a mysterious rivalry between two men by the names of Michael Jackson and Prince Rodgers Nelson.

Michael Jackson was a disco/R&B darling. But shortly after entering his 20s, an appearance on The Wiz plus back-to-back albums Off The Wall and Thriller solidified him as the King of Pop. Because of his showmanship, Jackson was the first Black American artist to gain popularity because of, rather than in spite of, his image. As much as Michael Jackson was a talent, he was even more of a spectacle.

Prince was also a spectacle. But the contrast is not between the star-powers of Prince and Michael Jackson. It’s what they were known for. Prince could play any instrument on stage, veered off into his own musical world at will, and maintained an air of secrecy that made him attractive yet out of touch.

Michael was simply the most fun person to watch on the planet. A personality everyone knew and the media adored. There was no escaping the drama of his personal life, or the high-pitched “hee-hees” and “shamones” on the radio and MTV. As fascinating as Prince was, Michael Jackson the figure has always meant more to pop culture than the complexities of Prince.

Drake emerged from the underground hip-hop scene with the continuation of a sound Kanye gave birth to. The confusing racial and cultural background coupled with the singing and surprisingly tough verses have always made The Boy stand out in the hip-hop world. But once the genre-bending Take Care dropped, “Drake-ing” became a thing. The OVO/Toronto sound became a thing. Sing-rapping became everyone’s thing. Drake became “the type of nigga” to appear on your Facebook, Twitter, or Instagram feeds multiple times a day for no reason. To this day, music fans, especially hip-hop fans, can’t stop talking about him. So much so that he trounced Beyoncé’s first-week sales of Lemonade in one day with Views. Who trounces Beyoncé?

Kendrick Lamar Duckworth was an on-the-scene reporter of the craziness in Compton his entire childhood. His ties to the various racial and social problems of his home plus his outside perspective on why everything was so fucked up has made him the poster child of artistic social activism in today’s world. Not to mention he has spit some of the greatest 16s of the past decade. With extremely tight, layered albums like Good Kid, mAAd City and To Pimp A Butterfly, he’s also become a darling among music critics. TPAB is the highest rated hip-hop album of all time on Metacritic. There aren’t many artists who can say their first two major-label releases are virtually guaranteed to be classics.

The complexity, social responsibility, and growth of Kendrick Lamar’s music have made it difficult to deny him as the greatest technical artist in hip-hop right now. But debates about “the best out” still seem contentious. As much as we want to blame rabid groupies for this, there is something to be said about Drake’s commercial dominance.

The Kings of Pop are a liiittle insecure

Among a number of hilarious stories about the jabs they each took at each other, there is one in particular that highlights the differences between Michael Jackson and Prince as artists. Journalist Steve Knopper, author of the Michael Jackson biography MJ: The Genius of Michael Jackson, shared a story with Esquire about a time will.i.am invited Michael to a show he was doing with Prince. Not only is it fucking hilarious, it mirrors a key part of the Drake and Kendrick rivalry.

My favorite story Will told me involves Prince and the rivalry he had with Michael. Nobody really quite knows the full extent of their rivalry, and I think both of those guys had an interest in keeping it somewhat mysterious because they are both mysterious dudes. But when Prince was doing his Vegas residency around late 2006, Michael was living in Vegas. Will was a guest artist at the Prince residency, but he was also friends with Michael. So Will arranged it for Michael to be a guest in the audience at Prince’s show.

No one knew it really, but Prince knew it. There was a point during the show where Prince was playing bass and he came out into the audience with this giant bass—he knew where Michael was sitting—and he walked right up to Michael and started playing bass in Michael’s face. Like aggressive slap bass.

The next morning, Will went over to Michael’s house for breakfast, and they’re talking about Prince and the show. And then Michael goes, ‘Will, why do you think Prince was playing bass in my face?’ Michael was outraged. And then started going on. ‘Prince has always been a meanie. He’s just a big meanie. He’s always been not nice to me. Everybody says Prince is this great legendary Renaissance man and I’m just a song-and-dance man, but I wrote “Billie Jean” and I wrote “We Are the World” and I’m a songwriter too.’ All this disrespect for Prince came out from Michael that morning.

This is eerily similar to the most contentious part of the Drake and Kendrick rivalry. Soon after Kendrick’s infamous verse on ‘Control’ where he put all of his hip-hop peers on competitive alert, Drake had this to say about it:

Yeah, but, at the same time, let it be real. ‘Cause those were harsh words, right? You can’t just say that and see me and be like, “Yeah man, what’s up?”

Drake also tried to frame Kendrick’s verse as an empty tactic to generate buzz, saying that he’d rather focus on making great bodies of work than being, “the talk of Twitter for like, five days.” Years later, Drake has emerged as a master manipulator of social media selling millions of copies of pop-friendly hip-hop albums. Meanwhile, Kendrick followed up a classic album with an arguably better, if not more important, album. Drake is also the only artist out of the group called out in Kendrick’s ‘Control’ verse to consider the move “harsh words”.

In the same way Prince’s reputation made Michael Jackson insecure about being a, “song and dance man,” Kendrick’s continued success, critically acclaimed bodies of work, and obvious lyrical prowess make Drake insecure about his hold as hip-hop’s best. It’s not a stretch to say his focus on dominating the charts is compensation for his inability to tear Kendrick down in the same way he did to Meek Mill.

Like many pop stars, insecurities played a big role in driving Drake and Michael Jackson to pop dominance. They’re both so successful, however, that only exceptional craftsmanship and unwavering confidence from a peer could make them feel like they were lacking. Prince and Kendrick Lamar simply lived their lives, grinned, and winked at their rivals every once in a while to remind them of this reality. It’s what makes Drake go back-and-forth between praising Kendrick Lamar in public and taking multiple subliminal shots at him on records. It’s what made Michael Jackson so frustrated, that he’d watch Prince’s ‘Under the Cherry Moon’ film just to laugh at his missteps in the film world.

But the renaissance men aren’t quite as beloved

Much like Prince was a more complete artist than Michael Jackson, Kendrick’s growth in songwriting, album crafting, and visual art have seen him surpass Drake in many ways as an artist. But much like Michael Jackson, Drake’s Midas touch is unprecedented. As well as Prince did commercially, Michael sold over 200 million more records than him. As amazing as Kendrick is live, Drake is the one selling out Madison Square Garden 4 nights in a row.

Both Prince and Kendrick have legendary catalogues that have left marks in music. Between Prince’s name change, androgynous stage presence, Kendrick’s ‘Control’ verse, and his solidarity with the Black Lives Matter movement, both artists are unforgettable to popular culture. As cemented as Prince and Kendrick are, Drake and Michael Jackson have songs and stories that continue to be more present in people’s minds than their subtle rivals.

While ‘Purple Rain’ and ‘Alright’ are memorable, ‘Started From The Bottom’ is becoming an idiom in the English language. ‘I’ll Be There’ is probably going to be a popular lullaby in 10 years or some shit. While Prince and Kendrick both have intriguing and inspirational background stories, Drake’s come-up, multiple beefs, and Michael Jackson’s long life in the limelight will become stories of oral tradition, passed down across generations as need-to-know cultural references.

There’s no denying Prince or Kendrick, but there’s no escaping Drake or Michael Jackson. That is the difference. That is why it’s so hard for MJ fans to just admit Prince could create better music with one hand behind his back than Michael could alone. That’s why it’s so hard for Drake fans to just let it out and say Kendrick, bar-for-bar, is a better rapper, and has greater albums than Drake. But the question of who has done more with their music is a different one.