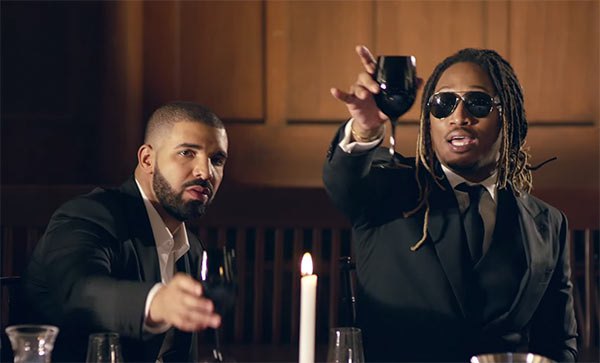 Clearly, you’ve never been invited to a private dinner at the high-end restaurant Nobu.

If you’re like most people, you probably Googled “Mercedes Pullman” after Drake instructed you to in the ’30 for 30 Freestyle’.

Drake and Future succeeded in making a lot of us feel broke as fuck in What A Time To Be Alive. But it’s kind of dope, actually.

Unlike Nelly begging for Bill Gates and Donald Trump to “let him in” on ‘Country Grammar’, or Future’s boldfaced lie saying he makes the same money as Cam Newton in ‘Rotation’, the flexing on WATTBA was silky.

The emphasis on flashing wealth in hip-hop is gross. It’s normalized for a new artist to talk about whipping luxury cars when the artist could very well have a negative net worth because they’re late on rent, or owe their weed man, or some shit.

Even though it’s not horribly original, I’m glad rich-nigga raps have more variety these days than, “Look at the watch on my hand, I’m insecure so I take pics with bands.”

I have no idea if this means boasts are going to be even more exaggerated. But ordering special edition luxury cars and booking fancy private dinners are experiences specific enough for me to be convinced that the person’s wealth is on another level.

If an artist wants to brag about wealth, I should actually come away with the impression that they really got it like that.

Between Drake being seated at Swiss, Sotto and Joso’s (‘5AM In Toronto’), and having seared scallops that were to die for (’30 for 30 Freestyle’), some of this legitimate rich nigga rap has rubbed off on Future. And I like it.

And Drake really has been at it for a while. The Take Care album cover looks like it was shot in a reserved restaurant booth, which isn’t a far cry from what he explains it to be.

Not to mention he made a scallop reference in that album long before the one on WATTBA:

“Scallops and glasses of Dolce, that shit right up your alley”

On Future’s end, I’m glad he’s getting out of typical trap songwriting patterns. Instead of talking about which designer shoes he’s selling cocaine in, like Ballys in ‘Where I Came From’, he’s telling more stories about his present. He stays true to his street foundation, but has been talking about it more in the past tense in exchange for more convincing boasts of wealth in the present:

Maybe the Black CEOs of the future will actually have a selection of appropriate lines from their favorite hip-hop artists to use. Maybe one day Barack Obama captions a pic of him and Michelle at dinner like, “Ordered her a fillet told ’em butterfly, she’ll love it,” (‘Stay Schemin’).

Until the world moves on from capitalism, I am all for the improvement of the rich nigga archetype in hip-hop.