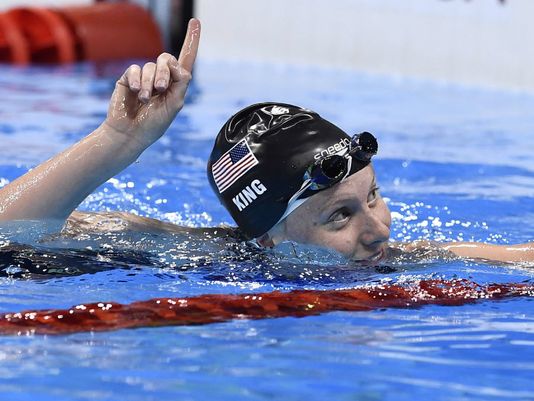 No one you know follows swimming outside of The Olympics.

But it doesn’t mean we can’t turn up about it when it is on national television screens every four years. And the Michael Phelps/Chad Le Clos rivalry is cool, but Lilly King was the one who gave us some real shit to watch last night.

Prior to the women’s 100m breaststroke final, King had already placed first in the heats and the semifinal. She beat Efimova by one hundredth of a second and two hundredths of a second in each respective group of races. After the semifinal race, King was asked about the finger-wagging she did in response to Efimova winning her semifinal race. That’s when shit got real.

There are a number of things about this moment that made a lot of people (i.e. me) go, “…OKAY then!”

With a face, a name, and a background story, Yulia Efimova went from an anonymous competitor to the juiced-up, cheating Russian bitch Lilly King HAD to beat.

Even though Efimova isn’t the first or the last person to use PEDs prior to the Olympics, and despite the stressful and varied circumstances in which many athletes do make that conflicting choice, it was just so much easier to support the criticism and ride with Lilly King all the way. If there were ever an excuse for obnoxious patriotism, this was it.

Female athletes who aren’t afraid to actually look competitive are dope. A woman shouldn’t have to fake smile and laugh during a post-game interview just because their frustration or their intensity wouldn’t be cute. Lilly King worked her ass off, set an Olympic record, and didn’t use PEDs. Though I won’t blindly hate Yulia Efimova, King has every right as a competitor to assert herself.

Talk that shit, Lilly. With or without the medal you won, you’re golden.