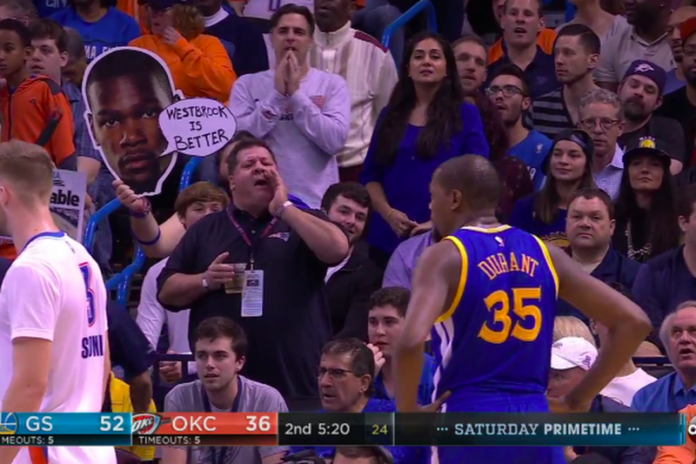 People consider Kevin Durant’s move to the Warriors to be more bitchmade than LeBron’s move to the Heat because the Thunder lost to the very team he left for. Though that detail is fucked up, the conditions which prompted both future Hall of Famers to leave were the same. The criticisms were equally rooted in one of the dumbest beliefs in American sports culture.

The Thunder haven’t been back to the NBA Finals since the lockout-shortened 2011-2012 season. When they lost to LeBron’s Miami Heat in 5 games, Kevin Durant led all players in scoring with 30.6 points per game shooting nearly 55 percent from the field.

In the ill-fated 2016 Western Conference Finals which ended KD’s Thunder career, Durant averaged 30 a game versus the conference-champion Warriors, including 27 on 10-19 shooting in Game 7.

If you work somewhere for the better part of a decade, consistently rank as the best person at your job and see no progress toward your status or ultimate goals, why would you stay? At 28 years old, how long were we supposed to expect Kevin Durant to run a double-headed iso offense and pray Andre Roberson or Enes Kanter show up for just enough playoff games to get them back into the Finals? What blueprint was there in OKC aside from letting the two perennial all-stars do the shooting?

LeBron was 25 when he infamously took his talents to South Beach. Could the Cavaliers have built around him in time to make the team competitive again after their 2007 loss to the Spurs? Maybe, but when the window of opportunity is as small as it is at the top of the NBA, is that a chance you really think is worth taking?

Is the honor of sticking with your team and singlehandedly leading them to a championship against all odds worth risking a clearer opportunity to cement your legacy? At the end of the day, people just want to see rings on your fingers and trophies in front of you. Expecting rare players like Kevin Durant or LeBron to give more than their all in the hopes of inspiring an otherwise questionable team places too much on an individual in a team sport.

Individual athletes should not bear the burden of an entire organization. However, fans of the NBA and NFL continue to take out their frustrations on singular people. Those two leagues are the most rooted in American culture, a culture in love with the idea of the overwhelming star athlete. To many, it’s not just an idea, it is an expectation of those that seem capable enough. It’s what makes stories like Tom Brady or LeBron so amazing, the fact that they actually lived up to those expectations. But even then, to rest team failures squarely on their shoulders is absurd.

What makes the fetish for superhero individuals in team sports more frustrating in Durant’s case is the amount of help people like to claim he had in OKC. The frustration does not add up: to critics, Kevin Durant played extremely well, but didn’t do enough in the end. However, he shouldn’t have left because he had a team that was good enough to win a championship with him. But if that team was good enough, why didn’t they win Game 5, 6, or 7 when KD dropped 40, 29, and 27 respectively? Is blaming KD just the easiest way of being upset about the shitty truth that the Thunder had reached their full potential in their current form at the time?

The Thunder would have caused problems in the West for several more years if Durant had stayed. But having spent 9 years there, and now being in the prime of his career, why should his character be attacked for choosing to play somewhere his ambitions can actually be fulfilled?

The pain is valid, the hate is not. There are many more people responsible for a team’s failure than its star player. Focusing on the organization rather than the player would make for more fair, quality commentary. However, it wouldn’t be as dramatic. It wouldn’t be as engaging to people. It wouldn’t be as American. I’m not sure if I love that more than I hate it.