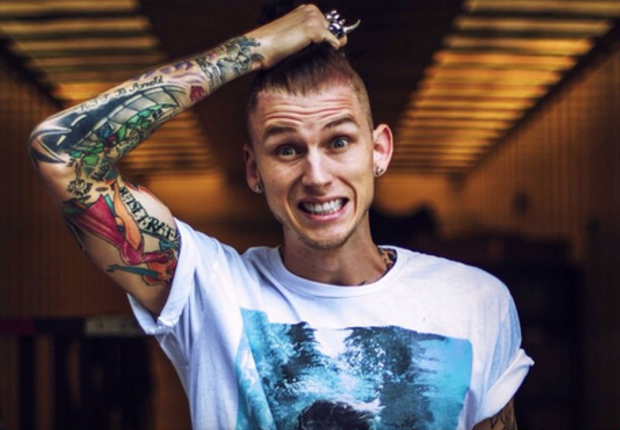 When Macklemore dropped ‘White Privilege II’ this past January, he successfully involved some of his White peers in hip-hop in the conversation about race, culture, and privilege.

Aside from the mention of her name in the song, artist Iggy Azalea responded with “Of course!” when asked if she agreed with the messages in ‘White Privilege II’. She also added a counter to accusations of appropriation by saying, “…all culture takes from all culture,” citing the globalization of culture as a reason to consider all cross-cultural exchange as harmless.

The distinction between respectful cultural exchange and cultural appropriation is certainly more complicated than, “all culture takes from all culture,” but it’s understandable for Azalea to deflect accusations of appropriation against her with such a statement. However, a White hip-hop artist would never flat-out say race doesn’t matter in hip-hop…right?

Unfortunately, Machine Gun Kelly gave such a shortsighted answer in an interview with TMZ shortly after ‘White Privilege II’ dropped.

“Race is an issue for people like Macklemore. I’m comfortable in my own skin. I can’t help other people be the same way,” he added.

Sure, White people in hip-hop have differing levels of security in their racial identities. But that’s not the point…is it?

A statement like MGK’s makes you wonder if healthy participation in hip-hop culture is truly beyond race. Can someone respectfully engage in hip-hop without thinking about race?

In many ways, artists can have identities that go beyond their ascribed social statuses. It’s possible to have full conversations about people in hip-hop without once mentioning race. Some figures with White identities are so tied to a class background or part of the culture that as long as they don’t say ‘nigga’, they aren’t ever questioned for their authenticity. More importantly, their White identity is not at their image’s forefront (i.e. Eminem, Rick Rubin).

But why can’t we say race doesn’t matter then?

Hip-hop culture was birthed out of the inner-city experiences of Black Americans and Latinx (please look that up) Americans. This does not mean people with identities outside of that are banned from engaging in it. But hip-hop is at the forefront of pop culture today because it began as a broadcast for those on the margins.

Entering hip-hop with a privileged identity requires awareness of this.

Even fans as distant as Japan do a better job of respecting the culture’s essence than White Americans. For instance, you can’t be Tom Hanks’ son and set universal rules on things like the use of the word ‘nigga’ and get away with it in this realm. And you sure as hell don’t get to say race doesn’t matter as a White male in hip-hop.

There is no way to mandate social responsibility from culture influencers, especially in a culture as broad as hip-hop. But on an individual level, you can’t ever appreciate the full significance of hip-hop without understanding what it does for people of underprivileged social classes and racial groups.

We can acknowledge the culture’s struggles with the treatment of non-male gender identities and non-heterosexuals. But it’s still a realm where disregarded people and viewpoints can be loud and authentically represented. And before we even get to broader issues of inclusion, White people have to understand their presence in the culture.

No matter how familiar with hip-hop culture a White person considers themselves, there are realities they should be expected to understand:

Much like hatred does not invalidate Macklemore’s impact, and elitism does not validate the criticism of newer forms of hip-hop by “hip-hop heads”, no amount of obliviousness or uneasiness regarding race validates the belief that race doesn’t matter in hip-hop.