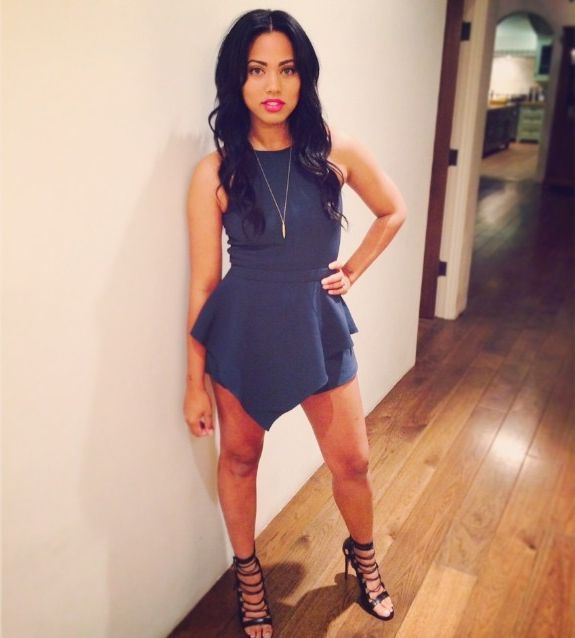 As covered by Refinery29 and Buzzfeed among other sources, the Ayesha Curry-Kim K debate started after 3-month-old tweets of Ayesha’s resurfaced following Kim Kardashian’s nude selfies on International Women’s Day. Here’s the first in a short series of Ayesha’s tweets about a fashion magazine she happened to be reading on that December day:

Everyone’s into barely wearing clothes these days huh? Not my style. I like to keep the good stuff covered up for the one who matters ???

The irrelevance of those tweets to the situation were not enough to stop Twitter’s aspiring mothers and young wannabe-love-guru-lookin-ass guys from picking sides and holding a debate.

I want to be an Ayesha Curry type of mom, not a Kim Kardashian type of mom…

Ayesha Curry represents the women that are lowkey, not reachin for attention, yet fine as hell and supportive of their man. Thats rare 2day.

And right on cue, an image like this pops up and becomes irrefutable proof that you gotta look for them Ayesha Curry types.

This is all a nigga need after a long day pic.twitter.com/IeLHFFzJfJ

What is wrong with y’all?

This is why all of your—mainly adolescent and young adult male—relationship goals fucking suck. You see seconds of media coverage depicting a quality couple under the combined age of 60 and latch onto the vision of your own life looking exactly like that. It can be Ayesha and Stephen Curry, or some of those IG pics with the captions telling you what your relationship should be like. Either way, it’s disappointing.

It’s enough of an issue that we’re so invested in people we see on screens. But to handpick these images of people that you don’t know and fully believe in either of the two grossly one-sided images of the ideal female partner is strange.

It’s also very convenient for those criticizing Kim to disregard the work she’s done to capitalize on her public image.

Does her sexuality sell? Yes. Do you all keep buying into it? YES. And while she has millions of people hooked, Kim goes ahead and publishes books, seals endorsement deals, and keeps you talking without ever talking shit about other public figures or letting her ego get the best of her.

Having a career rooted in other people’s obsession with your personal life does not sound fun or easy when you think about it. Yet there is Kim, a married mother of 2 who brought in $28 million in 2014 alone and continues to have a positive public voice on matters of femininity and sexuality.

Simply put, don’t put Ayesha Curry on a pedestal for a video and some tweets. And don’t feel conflicted if you can’t decide on categorizing Kim Kardashian as either a whore or a leading advocate of body positivity. It’s okay if they’re both just women making the best out of their situations. It is perfectly fine for them to have contrasting viewpoints on sexual expression without a. being rivals and b. representing sexist ideas of clean and dirty women.