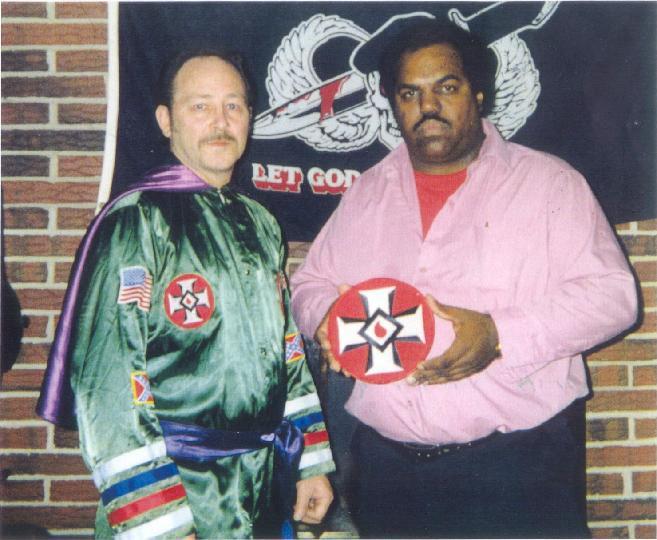 Any good racial justice activist on Twitter will tell you racists cannot be reasoned with. The best we can do is get White allies up to par with frontline Black activists in their understanding of the issue.

Ask Daryl Davis about dealing with racists, and he’ll give you a different answer.

Many a story has been written about Daryl Davis, an accomplished Black American R&B and Blues artist who has played with legends such as Muddy Waters, Chuck Berry, and Jerry Lee Lewis. More impressive than his musical career, however, is his lifelong fascination with racism. As a child, the reality of White people hating him simply for the color of his skin was baffling. But rather than hardening to that fact, he let the initial shock of America’s race problem drive his own research on White supremacists.

An interview with Love + Radio provides insight into his childhood experiences with racism that inspired his work with the KKK:

“Back in the early 1960s, I would attend international schools…my classes were filled with people from all over the world: Germany, Nigeria, Russia, Japan, France…That is how I grew up. To me it was just the norm. But at the same time I was being “multicultural,” my peers back in the United States were either going to newly integrated schools, or still-segregated ones.

He then recounts meeting the leader of the American Nazi Party in the 10th grade going to school in Rockville, Maryland:

We had a class called POTC, which stood for Problems of the Twentieth Century. And we had a great teacher. He would bring in various people from different walks of life to express their views, oftentimes controversial. Well on this one particular day, he had the leader of the American Nazi Party come to our class…you could not do that today in a high school *laughter*. All this political correctness…

He stood in front of the class, espousing all these views about White supremacy. And then Matt Cole looked at me, and pointed at me and the other Black guy and said, “We’re gonna ship you back to Africa.”

Somebody piped up and said, “What happens if they don’t go?” And Matt Cole said, “They have no choice. If they do not leave voluntarily, they will be exterminated in the upcoming race war.” From that day forward, I began collecting everything i could get my hands on that dealt with White supremacy, black supremacy, anti-semitism, the nazis in Germany, the neo-nazis over here…learning more about racism on all sides of the tracks was my obsession.

The Results of Daryl Davis’ Work

His personal research took a serious step forward when he met a KKK member at one of his band’s shows in Frederick, Maryland. The year was 1983. Dude was so fascinated with a Black guy playing piano like Jerry Lee Lewis, he offered to buy him a drink at the bar. Revealing his KKK membership didn’t stop the man from giving Davis his contact info and asking Davis to hit him up when he came back to town to perform.

The relationship led to Davis meeting with figures higher up in the Klan. To date, through continued discourse and befriending of Klan members, he’s convinced multiple Klansmen to quit their KKK memberships, including Maryland’s Grand Dragon Roger Kelly, two Grand Giants, and a Grand Klaliff. This had a huge impact in disbanding the Klan in Maryland.

Beyond the shock value of Daryl Davis’ story, it provides a strong counterpoint to the culture of political correctness, as well as the stance many racial justice activists take in regards to interacting with racists.

The KKK is disgusting. A sense of self-worth based on dehumanizing those who are different from you cannot be empathized with. However, Davis’ work highlights the people who buy into the platform. By allowing Klan members to assert their stances without being immediately vilified, the difference between character and ideology could be observed. Davis used the trust earned from Klansmen as a tool to shift the discussion of race away from attacks on character and toward attacks on the illogic of racism. In Davis’ work, this proved to be effective in convincing Klansmen of the stupidity of racism.

Is it possible, or even right, to use his approach?

Daryl Davis was warned by his first KKK contact in Maryland that meeting with Grand Dragon Roger Kelly would result in his death. This approach to defeating interpersonal racism is not light, and it is wrong to expect racial justice activists, especially Black activists, to willingly carry out this work. Even the thought of having a cordial conversation with the KKK is nauseating to many.

On a less extreme note, engaging with people who hold bigoted views or support bigots is almost seen as taboo in many liberal activist circles. I never understood this.

This discussion is nuanced. Protecting historically repressed people is necessary if we want to get anywhere in the fight for social equality. However, the enemy has to be directly engaged with in order to truly defeat it. College safe spaces, corporate affinity groups, diversity and inclusion positions, and affirmative action are tools to safeguard the upward movement of communities of color in the United States. They’re meant to beat institutional racism by putting people in positions to combat it on a level-playing field. What these tools can’t do is defeat interpersonal racism.

That can’t be done by shrinking the wealth gap or putting more people of color in executive positions. The improved condition of Americans of color without direct engagement with racists will only harden bigoted beliefs. Even in the best case scenario where hate groups and hate crimes are severely punished across the nation, federal government just becomes an even greater enemy in the eyes of the bigoted.

The KKK is an organization that needs to be put down. All I’m saying is the eradication of racism by law will not be enough. Legislation like the Voting Rights Act of 1965 and affirmative action policies drove bigoted beliefs underground, but did not dispel them. This was proven by the emergence of mainstream bigotry after the 2016 U.S. Presidential election. To beat bigotry systemically is to lock it away until the wrong people assume power and unleash it again. Seeing Davis’ work suggests the attack has to be two-pronged, and there aren’t nearly enough individualized efforts like Davis’ happening.

In terms of mobilizing those who are anti-racist, it is a waste of time to try and convert racists. If the leaders of Black Lives Matter prioritized hate groups in the delivery of their platform, the movement would have gone nowhere. But when pointing to Daryl Davis’ story, I am not asking people to halt their organizing efforts or stop talking about institutional racism. I want racial justice activists to consider what it will take to fully eradicate racism.

The vast majority of people are in no place to take on the weight of directly interacting with members of hate groups, and they shouldn’t be. But for as difficult as it seems, Daryl Davis has given us a rough-draft blueprint for effectively disarming bigots.

Follow-up notes: though I acknowledged the need for systemic anti-racist work to continue with or without converted racists, I believe I overemphasized the urgency of interpersonal work. It simply should not be the focus in a time where every major US institution has had their racist foundations exposed by the pandemic and the latest string of high-profile police killings of unarmed Black people.

I insist that anyone who can make people unsubscribe from racist ideology is doing good work. But I firmly reject the idea that all anti-racist people must be willing to put their humanity on the line to confront people who don’t see your humanity. Daryl Davis’ success confronting KKK members does not make him a better anti-racist activist or anyone else a worse one. His skill set is different, and while its approach is not systemic or always dignified, it’s valuable.