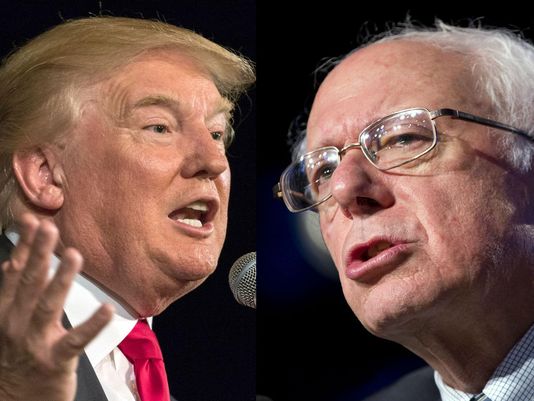 Trump vs. Sanders would be so American, wouldn’t it?

A radically liberal, Jewish senator threatening to give the nation a face lift squaring off against a real-life version of Uncle Sam’s volatile, attention-whoring nephew.

It’s almost like Trump had to happen. Like the country could not allow Black Lives Matter or Bernie Sanders to happen without a consequence.

It’s so American because these two candidates can actually exist in the same nation. It’s proudly American because we can have two people that don’t give a fuck about a political party run campaigns without being persecuted.

And in the midst of the wonderfulness that is the 2016 Presidential Campaign season, voters on these polarized sides are still finding similarities.

Hate Trump all you want. But much like Sanders is challenging what it means to be Democratic, Trump threatens to blow up the identity of the Republican party.

Considering both candidates cater to the fuck-the-system angst sweeping the nation, maybe it’s not so shocking to learn one of every ten Sanders supporters would vote for Trump should it come down to him and Hillary Clinton.

Demographically, the messages from both the Trump and Sanders campaigns are reaching many of the same areas: middle-aged White males, first-time voters, and people under 30 frustrated with the economy. Though Trump’s vision of the future is completely unlike Sanders’, both candidates want to do away with many longstanding social realities.

Noting the shared backgrounds of his and Trump’s supporters, the Sanders campaign has been plotting to convert some Trump supporters. According to this article from NBC News, Sanders has already made direct appeals to Trump supporters as early as the days leading up to the Iowa caucus.

Sanders views Trump supporters with optimistic potential. Among other things, Sanders thinks Trump’s large number of working class voters have the same economic fears as Sanders’ voters. The Sanders campaign strategy to convert Trump voters is to point out this congruence, then channel the bonding frustration into the more positive worldview of Sanders.

Sanders’ campaign even has a script for canvassers looking to win over Trump supporters, with lines such as, “A lot of people feel like this country isn’t working for them—because it’s not. The solution is not to turn to someone like Trump, with a message of hate, xenophobia, and division…”

Unfortunately, it seems like Sanders supporters are the only ones reaching their hands out in an attempt to find some common ground. The closest Donald Trump has come to engaging with Sanders supporters is threatening to infiltrate his campaign rally.

As we collectively freak out about the ridiculous course of the 2016 campaign, let’s try to appreciate some of the more unique phenomena. At least it’ll be entertaining, hehehe.