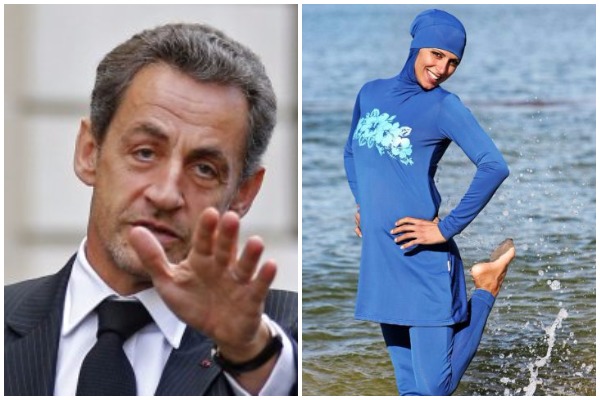 Not too long ago, wearing what is now a standard two-piece bikini was enough to incite a fine on beaches in Italy. Now, according to former French president Nicolas Sarkozy—who’s in the middle of campaigning to become president again—burkinis represent, “tyranny of the minorities.”

According to Sarkozy, it isn’t a huge deal to change the constitution since, “We’ve changed it about 30 times, it’s not a problem.” I guess constantly changing the foundation of your country’s laws doesn’t undermine their power, but aight.

Getting past that, Sarkozy represents the opinion of many when he says burkinis are offensive to French culture. In the minds of folks who can’t stand the full-body swimwear, a burkini ban would be freeing Muslim women from an uncomfortable responsibility. “Here in France, we don’t lock women behind fabric,” Sarkozy proclaimed.

Unfortunately, supporters of a proposed national burkini ban in France aren’t behind the idea because they want to liberate Muslim women. More than 30 small towns in France have already implemented a local burkini ban, and they’re doing it in response to recent terror attacks carried out by religious extremists.

Lionnel Luca, mayor of French town Villeneuve-Loubet, felt burkinis could, “exacerbate the tension felt by the population after a series of Islamist attacks in France.” The burkini was described as an, “ostentatious display of religious conviction,” by the mayor. Taking it a step further, French legislator Nicolas Dupont-Aignon said, “If we accept the burkini today, we will accept the sharia [law].” Whatever Sarkozy said about tyranny and French ideals of freedom seems to be a thin cover for the true issue many French people have with the burkini: it’s the fear of Islam being too loud in French society.

With 7.5 percent of the French population being Muslim, as well as lopsided unemployment and imprisonment rates, the fear of a Muslim cultural takeover in France is beyond rationality. What these attitudes indicate is an all-or-nothing approach to integration. The United States went through a similar heightening of anti-Muslim sentiment after 9/11 and is still recovering. We have to remember France has been through two large terror attacks (Charlie Hebdo and Nice) in the past year and a half that claimed Islam as their influence, as misguided as they may have been. Distinguishing between Islam and terrorists misusing the name of Islam is a long process for an entire nation to go through.

Despite the pain France is suffering from at the moment, allowing the idea of a national burkini ban to live is irresponsible. Sarkozy probably won’t regain his seat as president, but it means something about where France is at if politicians are appealing to people with this proposal.