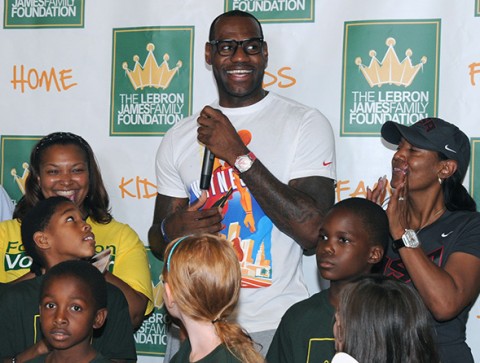 NBA.com broke the news of LeBron James being the executive producer of an upcoming multipart documentary on the life of Muhammad Ali. Last month, James donated $2.5 million to a Muhammad Ali exhibit at the Smithsonian National Museum of African American History and Culture. Not to mention the LeBron James Family Foundation currently has more than 1,100 elementary school students from Akron Ohio on track to receive full scholarships to the University of Akron.

As an elite basketball player, the things LeBron does off the court is usually summed up as, “Great, a nice rich guy.” But there’s more to LeBron’s non-basketball endeavors that make him an exceptional celebrity.

Not rich, but wealthy

First of all, LeBron has developed another legitimate hustle using the money he’s made throughout his career long before the end of his career. With business partner Maverick Carter, not only does he have a sports management firm, he has passionately launched into film production with his SpringHill Entertainment company. Along with the planned Muhammad Ali documentary, he has shows on or set to debut on Starz, CNBC, and NBC.

LeBron is creating wealth, not just sitting on—or worse, spending—all the guap he gets from hoops until his time runs out and he doesn’t know what to do next. As a Black American in the public eye, this is a revolutionary act. As long as the racial wealth gap in the United States exists, this will continue to be important.

All of his work elevates others

In the same way he uplifts the Cavaliers and the entire city of Cleveland while on the court, his work off of it isn’t selfish capitalism. His production company expands on his philanthropy and activism. SpringHill’s productions are primarily about the effects of sports on the character of athletes of color and their communities. He also continues to show a vested interest in uplifting Ohioan youth through his production work, launching the reality show Cleveland Hustles on CNBC this past August. The show features Cleveland entrepreneurs aiming to revitalize their neighborhoods with the help of LeBron and other big-name investors.

Much like Kanye said about musicians, an athlete cannot continue to be influential simply as an athlete. LeBron is still arguably the best basketball player in the world, but he has already set up powerful ways to continue impacting people long after he’s done with the sport.

This is what separates washed-up celebrities with money from A-list celebrities who gracefully age. Too often, star musicians, actors, and athletes are so sure in their work being timeless, they don’t do shit else with their lives once they’re done. And I’m sure some don’t even care if what they do is considered timeless. I’m not saying they are obligated to do so; if you have a 7-9 figure retirement fund, go ahead, live the rest of your life how you want.

All I’m saying is there’s so much potential to do good in this world that many celebrities toss aside. When the only thing you’re invested in as a star is the star life, you confine yourself. Fame seems like it can fill you up, but you only get hungrier. That’s drug-addicted musicians too numerous to count. That’s Drake’s obsession with controlling the rap game. It’s Mike Tyson buying multiple homes and pet tigers, only to file for bankruptcy in 2003.

LeBron has beaten those entertainment-world traps more impressively than anyone I can remember in recent history. And soon to be 32 years old, his life outside of basketball has already done a lot for people, and still has a lot of growing to do. In terms of fame and influence, LeBron is on a path to maintain or even increase his relevancy after basketball, much like Michael Jordan. He might even be…better.

LeBron James is a once-in-a-generation athlete, but he refuses to let his prime on the court be the peak of his life. That’s dope to me.