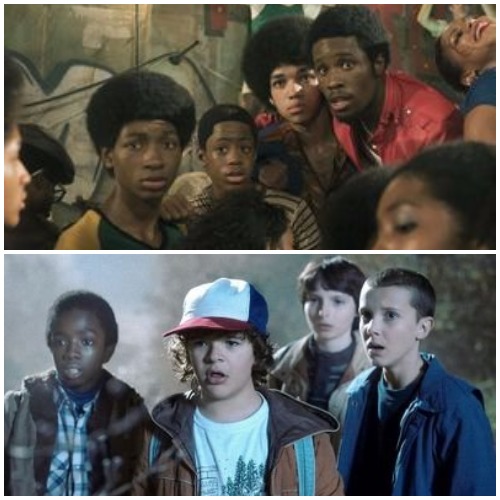 The Get Down and Stranger Things share a nostalgic feel that give each show context before they’re even viewed. But the stories are vastly different, and play on different sets of moods and feelings.

The Get Down is thick. Between the teenage drama, history of hip-hop, portrayal of Bronx street life, and New York City politics in the 70s, there’s a lot to take in. Even if you don’t bother to do more research on hip-hop’s founding fathers, Mayor Ed Koch, or the social forces that made burning buildings and lucrative disco clubs real, piecing together the impact of all of these parts in the show makes every episode extremely rich. This isn’t to say Stranger Things lacks complexity in its story-telling. However, The Get Down forces you to realize the shit going down in the show represents actual people and things that existed not too long ago. Trying to wrap your head around a character like Shaolin Fantastic, and then realizing a Black male in their early-20s could easily have been doing half of the things Shao does in the show is wild.

The casts of both shows are extremely lovable. As far as The Get Down goes, who doesn’t think Jaden Smith is interesting? Meanwhile, Shameik Moore going from geek in Dope to hardened Bronx hustler is impressive. Between the quest of their crew, Mylene’s dealings in the music industry, and Papa Fuerte’s political finessing, the show’s characters are so full of color and difference. A number of smaller realms overlap from time to time, like when Zeke gets the internship with Mr. Gunns through Papa Fuerte, or when Shao harasses Mylene for being a disco singer. Disco versus hip-hop, the streets versus the politics; everyone in The Get Down has a new story they’re trying to write in the midst of Bronx craziness.

The cast of Stranger Things delivers amazing performances, and the stars are a lovable group of friends. Dustin, the lisping voice of reason, is frickin’ cute. Mike is intelligent, has a crush on Eleven, and spearheads the group’s efforts. Lucas’ ass always seems irritated with someone, but he comes through. Not to mention a nerdy Black kid tends to be a good look. And Eleven, she throws things…with her mind. I don’t need to say anything else.