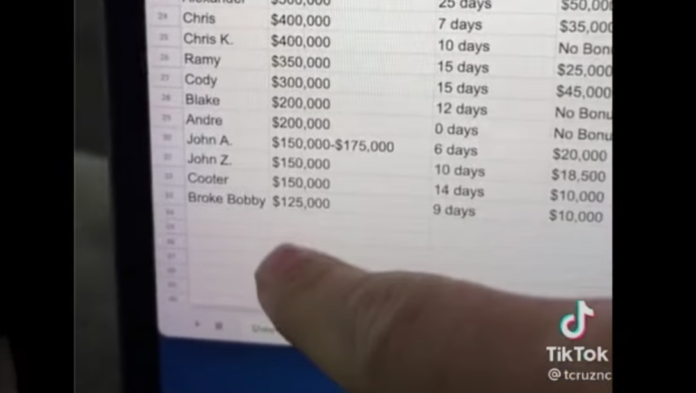 “Broke Bobby” is a symbol of detached wealth when he should be a sign that survival in America is terrifyingly expensive.

When you talk shit about rich people, who exactly do you think you are talking about?

In a Fall 2018 survey with 1,100 respondents, YouGov America found that 56 percent of Americans considered a $100,000 annual income to be the benchmark for “rich.” It’s no surprise, then, that “Broke Bobby,” faceless star of an investor’s viral Tik Tok video, was the subject of bewildered comedy as his annual income was listed at $125,000. But the video’s creator, Bobby’s friend Tom, unwittingly made a point about the outdated American understanding of what “rich” is.

In All Your Worth: The Ultimate Lifetime Money Plan, Senator Elizabeth Warren helped popularize the 50/30/20 spending rule for a good life: 50 percent of your post-tax income goes toward needs (e.g. rent, car payment), 30 percent of it goes to wants (leisure, consumer goods), and 20 percent of it goes toward savings (e.g. mutual funds, retirement). Using this rule, GOBankingRates conducted a study of 50 major US Cities to determine how much money a person needed annually in order to live by the 50/30/20 principle.

In 14 of the 50 cities — Seattle, San Jose, and D.C. among others — a homeowner and/or renter needs $100,000 or more to live comfortably. That is, once again, to be able to put half of their post-tax income toward necessities, 30 percent of it toward wants, and 20 percent of it toward savings.

Let’s restate that finding another way: in 28 percent of the cities in this study, you cannot save money or safely purchase nonessentials without making at least 100,000 US dollars annually. Forty percent (20) of the cities in the study require at least $90,000 to live comfortably. While “Broke Bobby” is certainly not starving, he is possibly not thriving the way popular reaction to the viral video suggested he should be.

Arguably more discouraging are these results: All of the 50 cities in the GOBankingRates study had a median income at least $20,000 lower than the “comfortable” annual income for a renter. Only four cities had a median income within $20,000 of the “comfortable” annual income for homeowners. Simply put, the average city-dwelling American does not make enough to live comfortably where they’re located.

Perhaps you are better with money. Perhaps you, like me, grew up in a frugal household that made video games and eating out seem like luxuries. While there are many ways to determine what living “comfortably” means, it is hard to imagine a definition not including the ability to pay survival bills and save money for yourself and loved ones. The existence of happy people living off of less money does not make the average American’s situation less unjust.

Despite plenty of data highlighting how modest $100,000 a year really is — like these 2019 RAND Corporation numbers and this 2018 Pew study — the average American’s idea of “rich” lags behind reality. Considering how many American cities require that much money or more to merely begin saving money and enjoying yourself, the American understanding of “rich” is painfully limited. “Broke Bobby” is a symbol of detached wealth when he should be a sign that survival in America is terrifyingly expensive.

Many Americans have to earn an annual income widely considered “rich” in order to live a humble middle class life.

A 2021 Rent.com study found the average one-bedroom apartment in the United States costs $1,621 a month. Education Data Initiative calculated the average monthly student loan payment in 2021 for a bachelor’s degree earner at $448 (God forbid you got a graduate degree). And if you’re thinking, “Damn, that’s a car note,” it is. Experian found the average used car payment to be about $400, with a new car lease coming in at $450 a month.

Paying those expenses buys Americans nothing but dignity: to not be houseless, to go places beyond their home, and to have the credentials to work an okay job. Not to mention spending on food, utilities, and various forms of insurance before you can even play with the idea of savings and investment. Trying to build credit to buy a home? Chances are you, like half the country, have a credit card balance much higher than zero. Hopefully you don’t want kids, don’t have family and friends that need help, or ever have expenses you never planned for. And sure, you can have fun. You can rest. But should you? Sounds irresponsible! Not to mention unaffordable.

Using time and money for things beyond mere survival is considered excess in the United States rather than necessary for a happy life. With many of the country’s most populous places requiring a six-figure annual income for a person to be well fed, sheltered, mobile, and saved up, you start to wonder how much it costs to just relax. And if you can begin to fathom that amount, perhaps you’ll see the Amazon software engineer differently, even if that asshole is leasing a Tesla. Perhaps an investment banker’s 70-hour weeks deserve pity rather than envy. They have nicer things and a sheen of respect, but are climbing the same greased-up ladder as you are with paper towels as grip support instead of the Chipotle napkins you were given.

Along with solid macro-level research, Jeffrey Wenger and Melanie Zaber of the RAND Corporation captured general attitudes Americans have about the middle class in the spring of 2021. Along with perceiving middle class people as thrifty and hardworking, it’s commonly believed middle class Americans are, “likely to have some retirement savings, own a house, and send their children to college.” But referring back to that YouGov survey and using the 50/30/20 benchmark, it seems many Americans have to earn an annual income widely considered “rich” in order to live a humble middle class life.

In the same article, Wenger and Zaber determined the United States’ 2019 middle class post-tax household income range to be between $51,527 and $137,406. Adjusting for geography and cost of living, Pew Research came up with a similar range in 2018. These studies make it clear that a popular American perception of “rich” is actually firmly middle class. And with wages stagnating, costs rising, and economic inequality growing, it’s hard to imagine a future where a $100,000 income guarantees any long-term financial victories for an American household.

Reassessing the value of $100,000 in today’s United States is not about defending the rich or shaming the middle class. Updating our perception of $100,000 helps us draw more accurate lines showing us where American people are at. Truth is, an American making $100,000 is closer to the financial and material realities of poverty than to an American earning a top 1 percent income.

Putting a $100,000 annual income into useful context should help the average American understand more of their fellow citizens are being punked out of the American Dream than they grew up believing. In fact, most Americans are being punked out of a comfortable American life. If Americans acted based on this reality, discourse about money would look different. Politics would look incredibly different. But the next step is having Americans believe they are not exceptions to the reality most of them live in…good luck to whoever takes that task on.

A few interesting pieces of data that didn’t end up in the main piece but are worth sharing here: