We’ve seen the Warriors in form. This isn’t it. You don’t have to tell me they’re just getting started, I know. But take an honest look at the competitive landscape of the NBA this year. What do you see?

At full-strength, 8 of the league’s 10 best teams according to Bleacher Report’s 2017-2018 preseason team rankings are led by at least two perennial all-stars, with at least one being under 30 years of age. The other two are the forever-winning Spurs headed by MVP-candidate Kawhi Leonard, and the Milwaukee Bucks led by the increasingly freakish Giannis Antentokounmpo. Five of those teams—the Warriors, Cavs, Thunder, Rockets, and Celtics—arguably each have at least 3 top-30 players in their starting lineups.

Not only is the league at its most top-heavy since the Celtics-Lakers 80s, the teams considered to be in rebuilding mode (i.e. Sixers, Timberwolves, Lakers) have stupid-high ceilings of potential. Between the core of young stars assembled on each squad, and the Lakers enormous free agency window in 2018, the next chapter of postseason drama in the NBA is already being written despite the Warriors/Cavs chapter not being over yet.

Even among teams fighting for position beneath the elites, many are still led by All-Star pairings or surprisingly efficient young cores. Mike Conley and Marc Gasol still make Memphis a gritty matchup you can’t sleep on, as learned by the Warriors last week in their failed visit. Both in their prime, elite big men Blake Griffin and DeAndre Jordan have led the Clippers to an impressive start without Chris Paul. An ascending Kemba Walker and veteran Dwight Howard have led the Hornets to a solid start, and back-to-back wins against the Clippers and Warriors have resulted in raised eyebrows at the Pistons currently tied atop the Eastern Conference with the Celtics and the…Magic?

This season is showing us that the NBA is going to be on a talent high for at least the next decade. The transitions of power in the coming years will make for storylines potentially as good as the Warriors/Cavaliers rivalry, and the NBA will be as, if not more, competitive than it is this year.

As fans, we’re considered fortunate to see legends in their prime have their moment, then fade in order to make way for a fresh generation of talent. However, years of accumulated draft picks, opportune free agency moves, and an expanding international pool of talent have made the 2017-18 season filthy rich with quality players from top to bottom.

Players like Karl Anthony-Towns, Ben Simmons, and Giannis Antetokounmpo are examples of generational talents that aren’t interested in waiting their turn for the spotlight, despite being on teams that are years away from serious title contention. As a 21-year-old, Australian Ben Simmons is already a consistent triple-double threat at point guard, and clearly on pace for one of the league’s most mind-blowing rookie seasons ever. Meanwhile, KAT and the Greek Freak are already the subjects of MVP candidate rumors at 21 and 22 years of age, respectively. This is all while the following group of veteran (5+ years of experience) elite players are either at or under the age of 30 with years left in their prime:

Along with several perennial all-stars like LeBron and Chris Paul playing at a high level in their early 30s, the league’s personnel depth is overwhelming. Selections for All-NBA teams at the end of this season and several seasons to come are going to be as difficult as they’ve ever been.

Adapting to a new era

On top of the improved quality of teams and players, everyone is shooting fucking 3s now. More importantly, everyone is getting better at it. As conventional big man roles evaporate, power forwards and centers continue to see their percentages beyond the arc go up. We’ve known this for a while now, but let me put it in perspective with a quick example. Look at the 3-pointers made and attempted (3PM-3PA) on these stat lines and guess which one is forward/center Demarcus Cousins and which one is top-5 shooter of all time Kevin Durant:

Did you get it right? 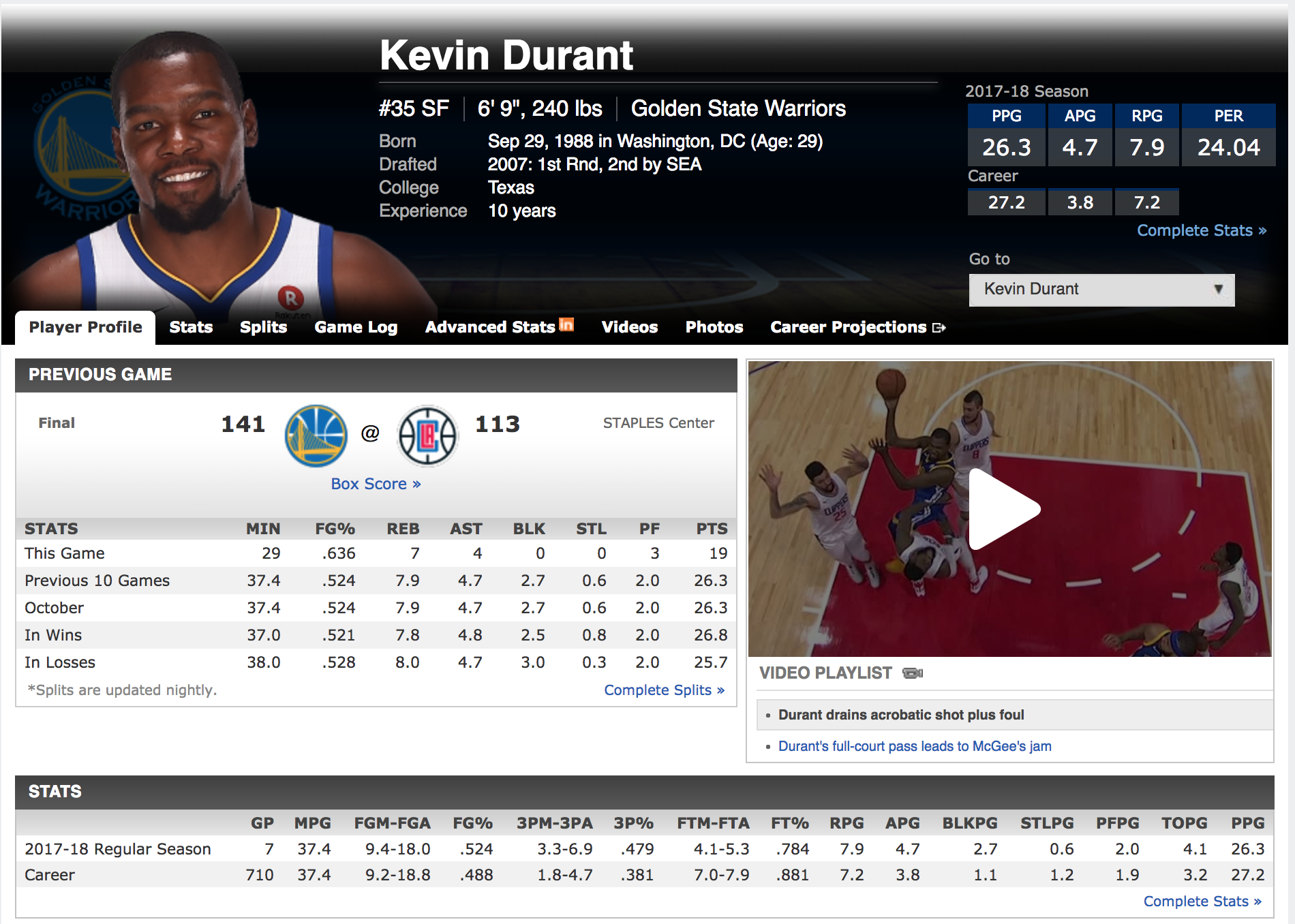 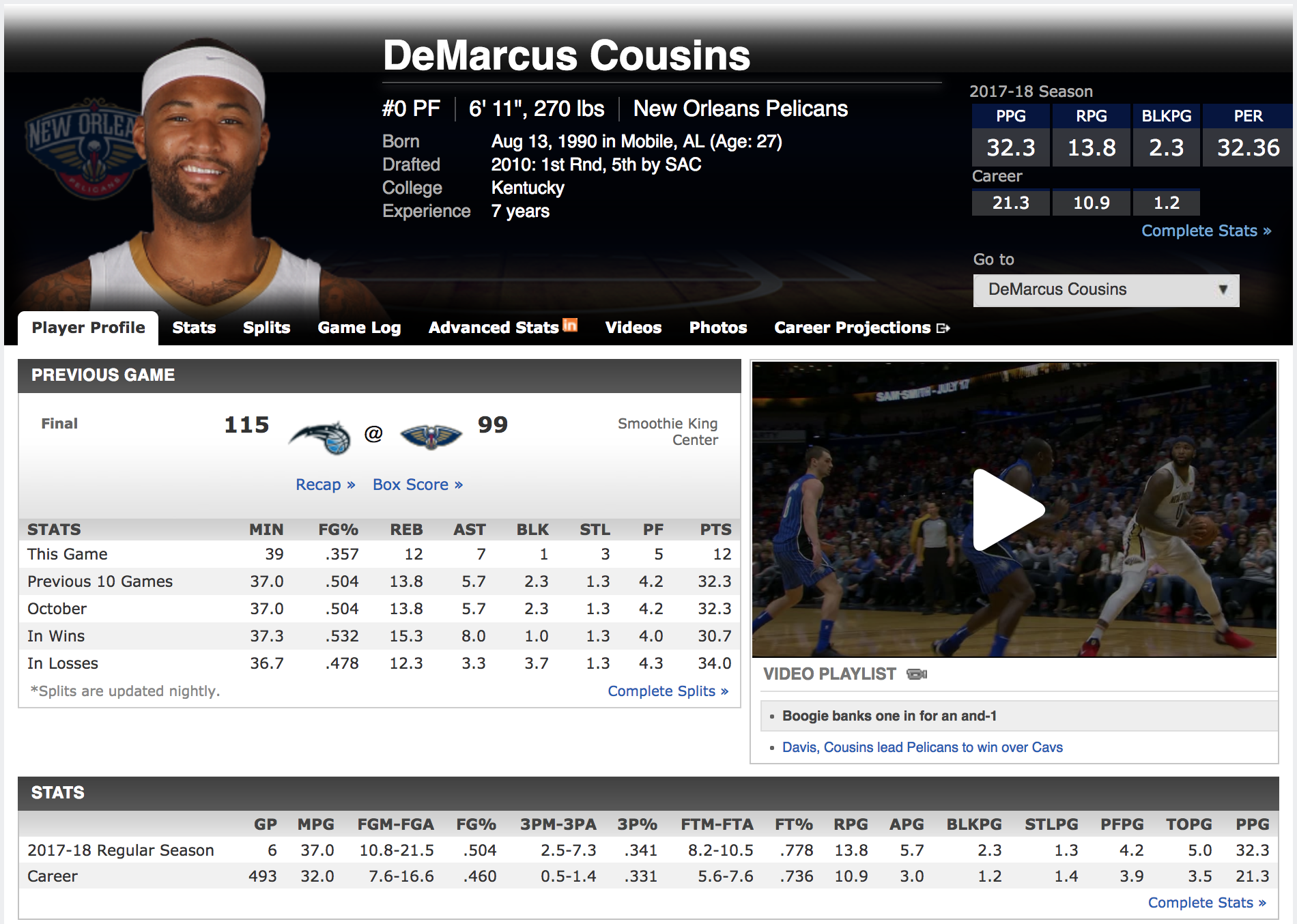 I’m sure the 3-point percentage gave it away if you happened to peep it. But five years ago, I wouldn’t have believed either of those shooting stats belonged to Cousins. Seven 3s per game??? And even if the sample size of games is small, making 34 percent of your 3-pointers as a big man is enough to make an opposing forward or center scramble on defense. Even conservative, back-to-the-basket power forwards like LaMarcus Aldridge’s clunky ass are pullin’ up for treys now. Seeing him spot up from behind the line against the Timberwolves in the season opener was a trip.

It’s not just the talent, growing international reach, or style of play that’s changing in the NBA. It’s all of it. The game of basketball is undergoing a multifaceted evolution that we’ve never really seen before. The MLB had multiple surges of power-hitting and influxes of non-White players, but they happened independently. International soccer has seen a lot of money injected into it over the years, but the game has been a global phenomenon for a looong time now. The NFL’s shift to a pass-dominant league was exciting, but it’s meh otherwise. And I don’t know enough about the NHL’s history to say shit about it. But in this snapshot of time, the NBA is the most exciting, unpredictable, and talented sports league in the United States.

Right now, I believe the NBA’s only match in unpredictability and talent is the English Premier League. In the same way big English football club’s are rarely expected to just breeze through their domestic season, I think the NBA’s level of competition is at a place where even superteams can’t look at any game on the schedule as a day off. I also think both leagues have the strongest brands of gameplay, as well as the most entertaining rivalries and team/club narratives.

Sure, a disconcerting start for the Warriors might put a blemish on what some (me, definitely me) expected to be a record-breaking regular season right out the gate. But it means something reeaaally good for the NBA’s future.