I said I thought critically about Anime, though that didn’t mean I participated in all other aspects of the anime fandom. One of these various expressions of the fandom is cosplay. Though it is not in my immediate stable of interests around Anime, I do appreciate the creativity and liveliness of cosplayers bring to the culture. I have nothing but mad respect for the players who go all out in channeling their favorite characters into stunning, real-life ensembles. Cosplay brings imagined worlds into the same convention center, and the result is a multiversal fun house that anyone willing to leave their conceit at the door can hop in and celebrate.

There is, however, a troubling shadow cast on cosplay, especially with Anime-related cosplay, and it goes something like this: most Anime characters look white, and therefore cosplayers who are white/fair-skinned are more authentic to the vision of the character.

This is a subject I’ve been meaning to do further research on, to find out if the state of racially inclusive cosplay has changed since Chaka Cumberbatch was raked across digital coals when her cosplay of Sailor Venus stirred the internet into whether Cumberbatch did an amazing job “for a black cosplayer”, or some other, often worse, gesture of tone-deafness.

For the purposes of this article, the notion that Anime acts as a kind of proxy for affirming subcultures where whiteness is the default turned my attention to a more ubiquitous industry that was also centered around identity through dress: fashion.

This is where I indeed reveal myself, in no uncertain terms, as a bona fide ass. Forgive me, God, for I have left a deprecating comment on a YouTube video.

The video in question: How to | Women’s Streetwear.

At 3:25, Frugal Aesthetic states, “Women’s streetwear is just as diverse as men’s, if anything more.” Yes, I’m aware he was referring to the fits that a given woman may have as her OOTD. Yet even that is up for debate regarding the examples we are shown in the video. With only one Black woman among a cast of White, East Asian, and ambiguous other racial identities, I felt I had reason to question the range of what “women’s streetwear” was being shown.

And what better way to call out the lacking racial diversity of women in a video about women’s streetwear than to deride the majority group in said video? I’d like to think I knew the answer to that when I posted the following flub:

But then I let this other user drag me back to roost two months later:

And the “if it ain’t white it ain’t right” guy came back to give me one backhand after the other, sealing one of my less-than-stellar moments in the YouTube comments: 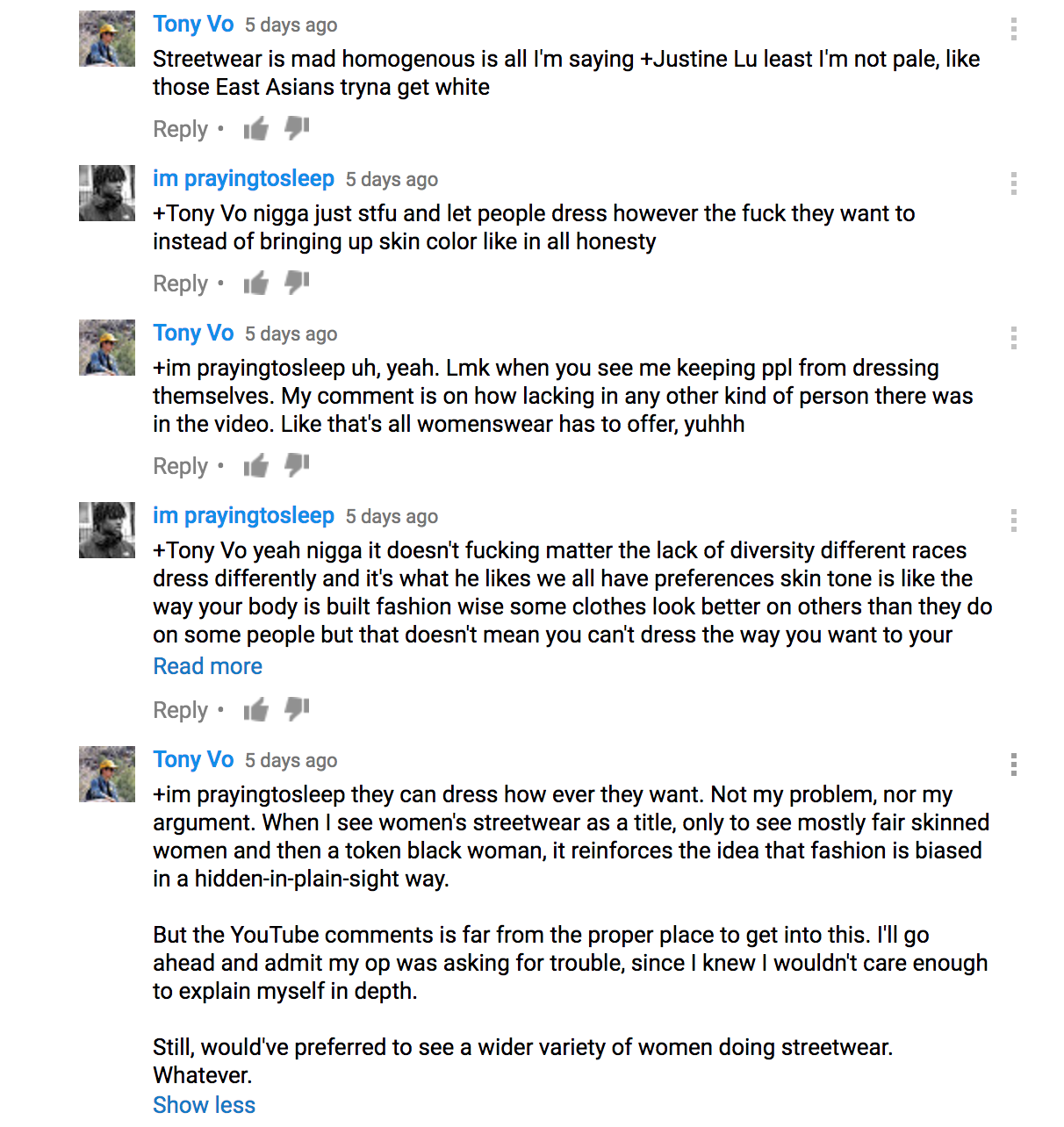 What the hell was I supposed to say? Being right on the internet was neither useful nor in any way satisfying. Which isn’t to say I wasn’t wrong in teeing myself up for the clapback that came. Every step in this comment chain was another misunderstanding that bared its teeth at me for being reckless with my post-video impressions.

What really vexes me about this exchange was how determined the other commenter was to this idea that I was policing how women should dress. I ask myself if bringing up the idea of whiteness as the default for the tone of a creative culture would have been a practical response or not. The other commenter’s excusing of racial biases of who gets to represent styles that appealed to a broad audience wasn’t going to change soon. And then I remind myself that every comment is risking an even longer and more unproductive flame war.

It’s tongue-in-cheek without resorting to making a target out of a class of people. But then I should ask, what was I so afraid of to be thinking about alternatives to my original post? This is the INTERNET! Backpedaling will only shrink whatever argument you may have been trying to make. Even if the packaging of my comment was hardheaded, there was still a truth floating underneath that deserved my full attention and explanation.

It is possible for a volatile comment thread to smoke itself out, and no one will stir the latent controversy back into a lively comment fire. I don’t want to start a war in a YouTube comment section, if only to not get caged into the straight and narrow drop of its structure. Once it gets to the point of taking several wheel-scrolls to read, it becomes much less likely that a civil and collaborative exchange is taking place anymore.

So. Where do you turn your observations into conversation-starting remarks after having watched a YouTube video with some questionable aspects to it? If you want something that remotely resembled discourse rather than digital dung-slinging, that is.

Both Anime and fashion are highly visible categories on online spaces and are beginning to show their colors as topics in greater need of scrutiny. Yet with the way the structure of these online spaces allows for discussions to take place, shared efforts to inspect these topics are looking dicey at best. In some ways, the issues that undergird topics like Anime and fashion need the precise eyes and hands of culturally-versed surgeons to deliver the answers we need on these issues.

What we have instead are surgical tools that are defective and activate aimless disputes that cause us to be at each other’s throats. Meanwhile, our patients carry on lying on the surgery bed, wondering if anyone will tell them if the diagnosis of a terminal illness was true, said surgeon #1, or not, shouted back surgeon #2.

I am only half-kidding when I equate high-level medical practices with petty spats on the internet. And I won’t take it back.