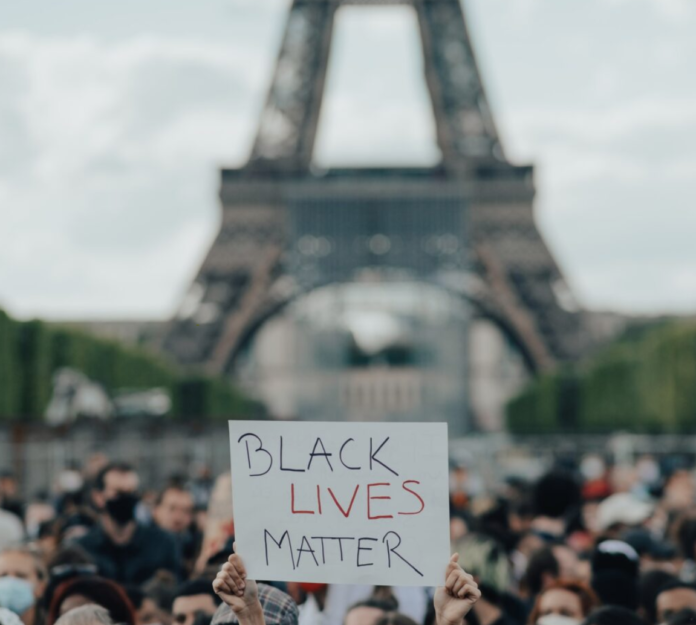 This piece was originally published by Plugged, a partner of ATC, on their blog Views From The Revolution. For more writing from and about the global Black community, get plugged in here!

During the height of the Black Lives Matter movement this summer, after the deaths of George Floyd, in Minnesota, and Breonna Taylor, in Kentucky, by their respective police departments, the whole world watched and took to the streets to march in solidarity.

In France, a country that struggles with police violence and deeply rooted structural racism, like the U.S., videos of angered Black and Arab Frenchmen and women marching and rioting went viral.

France has a culture of rioting and protesting, so the videos initially sparked laughter and confusion for American onlookers on social media.

Over the summer, I connected with two Afro-Frenchmen in their twenties, Ritchie and Sammy, about their experiences with racism and their thoughts on Black Lives Matter in France.

The following interview was conducted in French, but has been transcribed and translated with care for our Plugged audience.

How big is the Black Lives Movement in France and why are so many French folks enraged?

Ritchie: The BLM movement isn’t like in the States. In France, we were protesting because of police violence that happened here. The difference is that when George Floyd and Breonna Taylor were killed by police, the whole world reacted. It’s sad to see that injustices in the U.S. are necessary for us to begin discussing racism and police brutality in our own country.

As a Black man living in France, what has been your experience with racism?

Ritchie: I live in Montpellier, which is in the south of France. Down south, the police are calm. When I’m in the northern part of the country, like Paris, I know I’m in the north. When we were young, like five to ten years ago, we there used to be stop-and-frisks all the time. Police would bother you without reason. They would never stop white Frenchman, only Blacks and Arabs.

Back then, if you were walking with three or four of your boys, you were asking to be stopped. They would think that we were up to no good, but we would be just leaving school and heading to our sports clubs to train. Some of the guys would take it personally and would get aggressive with the police. I mean, when they come, they’re touching you all over, including your privates—it’s uncomfortable.

Once it happened once or twice, we got sick of it, so the next time we would see the police coming, we would run. You feel violated, intimidated. To this day, it bothers me.

Why do you think police brutality looms large in France?

Ritchie: The police in France abuse their authority. I have a cousin who used to live in France, and one time someone called the police on her, because she was unable to pay her bus fare. For one euro and twenty cents, they called the police. When they got there, they grabbed my cousin, who was 16-years-old, and pushed her against the wall. I was there watching it unfold. I stood up in front of the cop, who then grabbed my cousin by her stomach, before bending her arm.

I yelled, “Just because you haven’t gotten a drug bust, doesn’t mean you can attack a 16-year-old girl.”

The cop looked at me and then said, “Get that Black over there.” At the time, I was living with a white dude, who was also there. They took him too. He hadn’t done anything. The cop then looks at me, grinning, “You sure about that?” He then started questioning, saying that he would kill me lying, saying that I gave him death threats.

I would never tell anyone that I would kill them and their parents. He was lying on my name, but it was my word against his. They even tased me. Just because of that incident, I had charges pressed on me…That has been my experience with the police in the north.

How has your experience in Paris differed from how you’ve encountered racism in Montpellier?

Ritchie: In the south, the police don’t typically act that way. It’s not as violent. The issue with racism in the south has more to do with employment and professional development. For example, I have an Arab friend in Paris, who applied for a job down here. In Paris, if you work hard enough, opportunities can present themselves, but in the south, it doesn’t work that way. Even though, he had experience and was a strong candidate, he was rejected.

Racism in the south is less aggressive than up, but it’s still present and heavily camouflaged. If you’re Black or Arab you can be a deliveryman, maybe even work in a café, but even then, it’s rare that you’ll see a Black waiter or waitress. In jobs that involve some level of risk or denigration, most of the employees will be Black or Arab. Any office-related jobs are for the whites. It’s crazy, because there are so many college-educated minorities, yet those spaces are reserved for whites.

My sister graduated with her J.D., but she had to move to Africa to find work, just because they wouldn’t hire her in France.

Socially, how does racism impact the French Black youth in France?

Ritchie: Clubs will tell you that they have quotas for Blacks in the club. Sometime they will only admit five Blacks. If you’re with a big squad, you won’t enter. If they don’t discriminate with a quota, they will tell you can’t enter the club with the clothes you have. Honestly, if you want to make sure you get inside the club, you should try to have a few white folks in your crew.

What would you say are the biggest challenges for Black Frenchmen?

Ritchie: Personally, I feel that the problems stem from a few things: one, identity issues. With so many Afro-Frenchmen, how are we supposed to identify, French, Black or other? Two, there’s a huge problem with finding employment when you’re Black, regardless of your academic background. Lastly, I think there’s a massive issue with access and sharing of information.

Sammy: Many of the youth, aged 22-33, they have a lot of energy to make something of themselves, but their lives are sh**. Their lives feel stagnant, they are mentally fatigued of constantly being rejected from jobs. They are putting forth the effort, but there’s nothing more for them. If you have the will to be great and resources, it shouldn’t be too hard to grow professionally and economically.

With no options, these young workers go work in factories or delivery, working 40-50 hours a week. They don’t have a life. Personally, I won’t accept any odd job, I respect myself too much. I got to enjoy life as much as I can.

Do you think that Black Lives Matter could lead to positive change for Blacks in France?

Sammy: I think the movement is a good start, but I’m not optimistic. I have to give it six months and see if anything changes.

Ritchie: BLM is a good start. I just hope that the movement can create a solidarity amongst Black people across Europe.

Sammy: It’s important to note that in the U.S. there is a culture of trying to understand the problems in society. In Europe that doesn’t really exist, which makes the current moment even more challenging. Wherever you look in society, the Black community is always at the bottom.

We’re always crying out for police and other government administrations to be less racist, but all the dudes from the senate do is sign mandates allowing police to continue their stop-and-frisk of young Blacks. Black people are human beings, but our society can’t seem to grasp that.

Is there anything that has surprised you about the Black Lives Matter in France and is it movement sustainable?

Sammy: I was shocked by how many white folks were protesting. If more young white folks see the problem, I think there’s a chance that change could come someday.

Ritchie: I still think there’s an issue with power and leadership. There are not enough Black people with power and influence in France, and if there are, many of them don’t support Black communities. We’re just not respected. We don’t have Black leaders to follow, we’re not represented.

Sammy: I refuse to forget my culture, it’s who I am. I will never forget who I am and where I’m from. France wants assimilation, which is code for forgetting your history and culture. I will never forget mine. I have to wait and see what comes next from BLM in France. We must be punctual and have a list of demands.

Ritchie: For now, I haven’t seen a list of demands from the movement. Thus far, in France, there is no structure. At least in the U.S. there’s some sort of structure.

Sammy: There are no leaders here. For a country like France to have no leaders, it’s sad. Many of us Black Frenchmen follow leaders in the U.S. We get our inspiration from Black Americans. Anger and frustration start movements, but without leaders to guide us the movement will flame out like it always has.

This article was published in partnership with Plugged.

Across The Culture works to make popular culture less maddening and more useful. If you’re a brand interested in partnering to create such content, send an inquiry to zander@acrosstheculture.com.