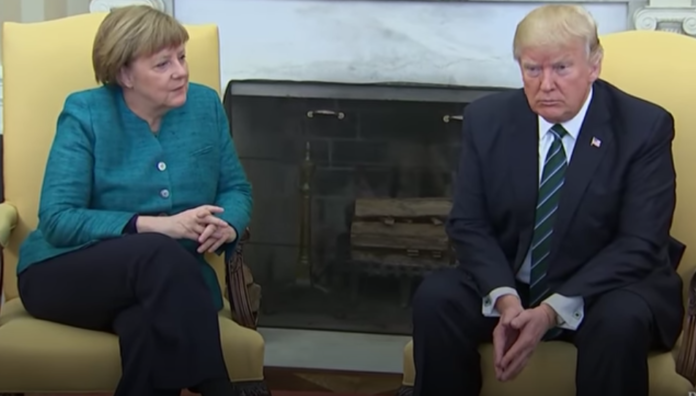 When you ask an infant to greet you, it’s liable to look away or stare at you funny if it catches a bad vibe. This is not what German Chancellor Angela Merkel expected from the President of the United States on Friday.

One of the most popular depictions of Donald Trump in foreign media is that of an enormous man-baby. Whether it’s the pathetic insecurity displayed when he lashes out at SNL, or the offensively simple-minded rhetoric he uses to speak to his followers, there’s a very base-level sense of maturity that this guy is simply missing.

Among other symptoms of “Waaah, I’m smart, I win bigly, look at me” behavior include his peculiar approach to the old-school gentleman’s exchange: the handshake.

The tugs, the hand-petting, the unnecessary amount of time taken. If you make something as basic, boring, and out-of-mind as a handshake look weird, you are doing some weird shit.

There’s literally no reason why the formality of a handshake should be so competitive that it’s all anyone can see in your interaction with another grown adult in front of a bunch of other grown ass adults. You’re expected to let something as important as, for example, a Supreme Court Justice nomination, happen without throwing your ego’s stink all over it.

Someone who makes such a show of something as plain as a handshake must be DYING for attention and control under that awkwardly stretched grin of his.

As a powerful public figure receiving this treatment, you can’t really lash out against it. Surprisingly, you might be the one that ends up looking bad.

It’s almost as if you were…hitting a child. A child that stuck its tongue out at you when he thought no one was looking. You’re not supposed to entertain that if you care about the child. But when the child holds the highest political office in the world…see why this is not good?

Anyway, when Trump met German Chancellor Angela Merkel, it added a very interesting new chapter in the story of Trump’s social etiquette disorders. When asked to shake her hand, he simply did not. He didn’t even try to give a bullshit excuse. He just sat there, said nothing to anyone, stared blankly, and waited until they stopped asking.

Unlike his energized greetings of Japanese PM Shinzo Abe and Canadian PM Justin Trudeau, Trump was reserved, maybe even nervous, in the presence of the German Chancellor. Clearly, the adult move here would be to shake her hand. But “adult” by the standards of our man-child president is refraining from yanking a dignified 62-year-old woman’s arm off by simply ignoring her request.

The meeting with Merkel truly put his diplomacy to the test. He couldn’t hand-jerk and loudmouth his way into making people think he walked all over Germany. The topic of NATO is not something Trump can bullshit about to his supporters without being checked.

Given what we have to work with when assessing our current President, the extent of these man-child accusations are not baseless or slanderous. Considering the baseless and slanderous nature of the shit our current President says about media figures doing their jobs, write-ups like this article might even be considered defense against the constant gaslighting we shouldn’t even have to endure from the leader of our great nation in the first place.

Media networks providing coverage of this White House administration should not be intimidated into normalizing this. This shit isn’t normal social behavior, especially in the role of POTUS. Please remember this the next time you tune into CNN or Fox News.