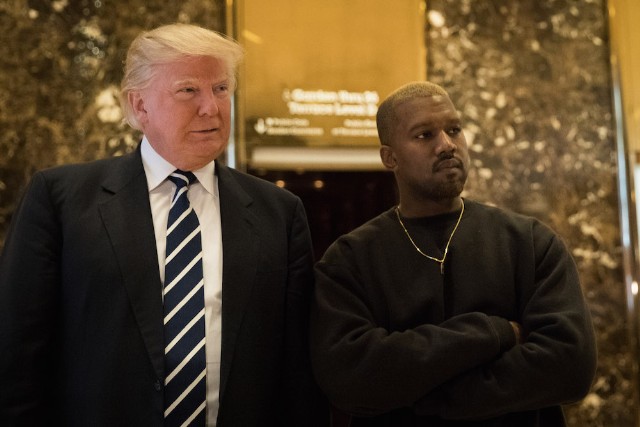 Even though I “finished” the series, I knew there was going to come a time that I had to revive it. The initial “Kanye is wilin omg” reactions to the latest chapter in Kanye’s public saga have given birth to the fourth “Understanding Kanye West Rants” piece.

Yes, he wasted his fans’ money by cutting his recent Sacramento show short. He upset many others by canceling the rest of the tour. He aired out personal grievances in a public space, and people have a right to not give a fuck. Ye’s problems are not yours, but the point of this series is to remind you that the stuff he talks about directly and indirectly affects you, the pop culture consumer. Though wild as fuck, his choice to deliver his message in the way he does is rational given his goal. What better place to discuss corruption in the entertainment world than at entertainment venues? How do you shift the culture without talking to the consumers of it?

Ye rants at shows, interviews, and other public venues because that’s where you, the pop culture consumer, will be. Kanye’s statements are both valid and relevant to you. All you have to do is…listen.

I picked out 5 statements from his Saint Pablo Tour rant in Sacramento last month that a. cover his main talking points, b. caused the general public the most confusion, and c. related to other notable Kanye rants and episodes between 2013 and his meeting with Donald Trump earlier this month. I will list the times in the following video that each quote appears.

“I know it’s a lot of real niggas working in radio, real people…that can’t play what they wanna play because they’ve been PAID to play that bullshit over and over and over,” (1:46)

Payola is nothing new. Buying air play is one of the oldest forms of manipulation in the music industry. What frustrates many fans and artists, including Kanye, is the lack of commitment radio has to playing the best music versus the easiest to listen to, or most widely appealing.

In his 2013 interview with Zane Lowe—an interview I heavily picked apart in Part 1 and Part 2 of this series—he discusses the lack of radio play Yeezus received upon its release. Ye explains that his tour and merchandise sales were through the roof, but those numbers did not correlate with the amount of exposure his lead singles got on air. He went as far as to say this about “Black Skinhead”:

“That song is a hit record minus, “Fuck you and your corporations, y’all niggas can’t control me,” said on your first single [“New Slaves”].”

Kanye later exclaimed, “Drake is a great artist, but Frank Ocean is too,” and accused DJ Khaled of politicking the single “For Free” into the mainstream success that it was. While Ye clearly respects both Drake and Khaled, his point is clear: artists who manipulate the industry to increase exposure are doing so unfairly, shitting on other artists who don’t play the game as viciously. His war against industry powers, starting with the huge middle-finger that was Yeezus, is an attempt to defeat politics in the music industry, not to tear down his peers.

Kanye’s desire to rinse pop culture of its behind-the-scenes bullshit is the same rhetoric used by a certain president-elect of the United States. This similarity is not lost on Kanye, and he made the connection explicit in this next quote.

The basis of Donald Trump’s campaign was unashamedly appealing to fear and frustration. Instead of trying to control chaos, he became its face. Historically, when the masses of a society feel scorned by the way things are, their ability to fuck shit up for the sake of change is unstoppable. It’s the story of virtually all major societal revolutions in history.

A creative entrepreneur is not a politician, but music and fashion can be just as political. Kanye, in many ways, is the entertainment world’s Trump. He uses his fame as influence, despises convention, and discusses his agenda with no filter. However, people don’t vilify the music or clothing industries in the same way people hate the United States government.

Kanye wants to fuck up these industries Trump-style. He wants to disrupt elites that run these industries, and make them more transparent for both creators and consumers. He wants a movement like Trump’s, but Trump’s supporters had a clear enemy. It’s easy to make people view Hillary Clinton as the face of an evil group of diplomats and Wall Street executives. It’s hard to rally against “radio” or “the fashion world”. People don’t know what iHeartMedia’s CEO looks like, nor do they care yet. It’s why Ye continues to throw big names and behind-the-scenes stories into the face of the general public to help them see what he sees.

But Kanye is literally the only person talking about this shit. We continue to see media outlets clown him for doing so without ever confirming or denying his claims. As Ye said in his rant, outing billionaires and media corporations comes with no benefit to him. In fact, as an artist, it’s harmful to his success. But no one wants to fuck with Kanye’s battle cry because no one knows enough about what he’s fighting for to even care.

“Obama couldn’t make America great, ’cause he couldn’t be him to be who he was…Obama wasn’t allowed to do this *screams and writhes* and still win. He had to be perfect. But being perfect don’t always change shit, bruh,” (6:39)

For as much success as Obama had during his presidency, Black critics of him think he didn’t do enough to challenge social injustices such as the racial wealth gap and the prison-industrial complex. In this quote, Kanye acknowledges that Obama had no margin of error in order to be taken seriously as the first Black president.

He couldn’t be, “him[self],” to be, “who he was,” which was the first Black president with a pristine public image.

While he acknowledges that President Obama could not rock the boat too much, he makes the argument that rocking the boat is how things change. He reiterates that being disruptive and challenging large systems never looks perfect, justifying his outbursts and unconventional ways of raising awareness to certain cultural issues.

Taylor Swift didn’t need to be interrupted. Fans who bought Saint Pablo Tour tickets didn’t deserve their shows to be cancelled. But honestly, where else are people going to hear anything about elitism in pop culture and how it affects the masses? What other artist is bold enough to even begin the discussion?

Ye’s longtime mentor Jay Z is a counterexample to Kanye’s approach toward the music industry. Roc Nation and TIDAL are examples of Mr. Carter slowly moving forward in a room full of vultures. Kanye is like Jesus walking into the temple and flipping the moneychangers’ tables.

Work like Jay Z’s will certainly have long-term affects that we appreciate, but no one will understand the scope of the issues without someone like Kanye. He knows the media will crucify him like they did Christ, but Ye knows he’s shedding light on shit people need to care about, but don’t want to yet.

Ohhhh, he’ll give us what we neeeeeed…it may not be what we waaaaaant.

“Beyoncé, I was hurt. ‘Cause I heard that you said you wouldn’t perform unless you won Video of the Year over me and over Hotline Bling…sometimes we be playin’ the politics too much, and forgetting who we are just to win. Fuck winning,” (8:29)

A reiteration of his point about music industry giants using their weight to stay at the top of pop culture. The Wrap looked into this claim by reaching out to MTV for comment, and investigating the MTV VMA voting system. Not only did MTV decline comment, its voting process seems to be as rigged as Kanye suggested in Sacramento that night.

From the same Wrap article, here’s a quote pulled from the now unavailable VMA voting page, courtesy of the 2014 Houston Press article, “We Love the VMAs Because They’re Rigged“.

If for any reason this voting process is interrupted…or for any other reason that Sponsor [MTV] believes in its sole discretion to be reasonably necessary, Sponsor reserves the right to select the winners at its discretion.

The well-researched Houston Press article shines light on the pretty common trend of megastars working with award shows for mutually beneficial business outcomes. Higher ratings for the network, juiced-up marketing for the artist currently poppin’, happier fans. Beyoncé threatening to not perform seems like a fair enough “interruption” for MTV to just hand her the award.

As plausible as this claim is, there was simply no way Kanye was going to have a chance against public perception here. He came after Jay and Bey. No one goes after Jay or Bey, let alone both of them at the same time.

This part of Ye’s rant was responsible for most of the negative backlash. But there are a couple of very frustrating parts about how people reacted to it:

The main point of the last three minutes of this Kanye rant is a warning to cultural influencers (i.e. Mark Zuckerberg, Jay Z, Barack Obama) about using old methods to solve new social problems. It’s criticism of the world’s most influential information holders failing to understand how the general public really feels about things.

This is what he meant when he yelled, “Google LIED to you,” and, “Mark Zuckerberg LIED to you,” in reference to Google’s and Facebook’s predictions of the 2016 U.S. presidential election.

He later says commercial radio and the aforementioned influencers could get “Hillary Clinton-ed” in the future if they don’t get a pulse on the general public soon. In both politics and the business side of cultural product, Ye is simply done with how organizations are serving their constituents. We should be too, but it’s easier to laugh than ask why he feels how he feels, isn’t it?

Kanye is extremely flawed, and he’ll be the first to tell you that. Perhaps there was a lot more he could have done to sit these artists down prior to airing them out. And if he really wanted to go public with these criticisms, maybe he could have done so without wasting thousands of his fans’ time and money.

But do you expect pop artists at the top of their game to politely stop playing music industry politics?

Do you expect Barack Obama or radio executives to admit they’re behind the times?

Do you really think Kanye would say all of these things just to make a scene?

These questions don’t apply to you if you don’t believe Kanye is saying anything of value. But skim one of the previous pieces in this series, or look at Kanye West’s track record in the music industry, and you’ll admit that only a case of serious denial could keep you from thinking Kanye West has important thoughts to share with us.