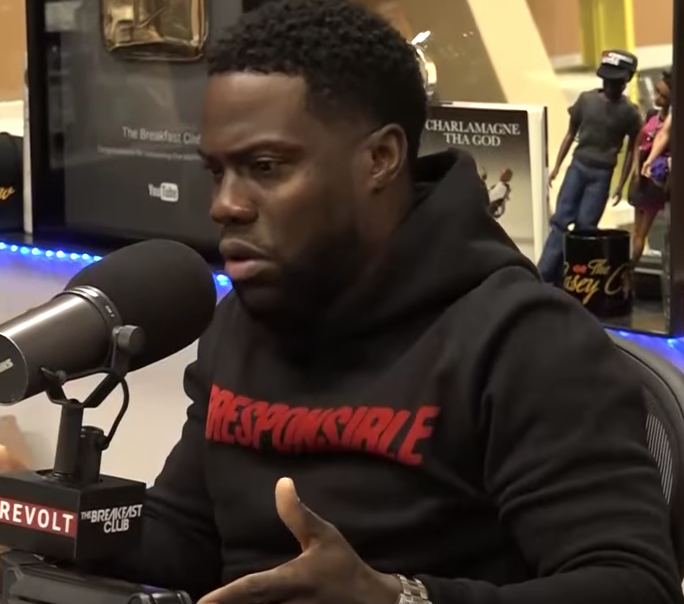 There is plenty for Black men to be celebrating this New Year’s Eve. The next-level dominance of Black male hip-hop and R&B artists in the music industry, Colin Kaepernick, Donald Glover winning an Emmy, you name it. But not only were the Ls we took high-profile, they were necessary.

With clout comes responsibility, and there are too many instances of irresponsibility in the public eye that Black men everywhere need to acknowledge and learn from to avoid shading their own glow-up.

Black men of the LGBTQ community don’t deserve to get lumped into this piece, so below is a summary of a year of fuck-ups for *straight* Black men in the public eye.

Cheating on the baby mama you cheated with

Kevin Hart will probably end up being the most commercially-successful Black comedian of this generation. But only the reflective power of his self-deprecating humor saved him from the nightmare of being blackmailed with an explicit video of him cheating on his pregnant wife…the woman he cheated on his ex-wife with.

Like all his other flaws and fucked-up life experiences, he will damn sure be profiting off of this story as he’s currently on tour with his latest comedy special Irresponsible. This interview with the Breakfast Club details his intense reconciliation with his wife after this matter. Since Kevin seems to be absolved by those he’s hurt, I’m in no place to pass further judgement. Despite the huge L, he’s learned from it and has set himself up for a much better 2018.

Exposing women to genital herpes without telling them

Usher has had one of R&B’s greatest and most longstanding careers. But life imitated art a little too well in his case. I refuse to laugh at the simple fact that he has herpes. It’s that he has it, had sex with women without disclosing his condition, gave herpes to them, and then got exposed for it. One of his sexual partners who accused him of such deceit was subjected to unnecessary harassment and body-shaming at the peak of this mess, and the ‘Let It Burn’ jokes came in one massive tsunami wave.

The number of Black men that took issue with Colin Kaepernick’s rebuttal of the NFL’s sterile, wishy-washy politics was shameful. Even worse was the switch-up the entire league hit on Kaepernick once it became cool to kneel during the national anthem.

The cause for which Kaepernick knelt—more attention to racial inequity in all aspects of American society—was quickly lost in the sauce as people wrongly conflated the kneeling protest to pushback against ‘ whatever version of the story helps implicitly racist White men sleep at night. But once owners showed their true colors in a string of anti-protest comments (i.e. Bob McNair’s comparison of players to inmates), kneeling was the wave. Even Ray Lewis’ sorry, shortsighted ass did it during the Ravens-Jaguars game.

Worse than isolated events of impulsive criticism such as Lewis’ is the campaign against Kaepernick that FS1 show host Jason Whitlock has been leading for a while now. Among other things, Whitlock has reduced Kaepernick’s protest to a “racial shakedown” of the NFL simply for a roster spot, and has criticized other Black sports commentators for being politically correct rather than his version of “real.”

From a cheap skit that didn’t air on FS1 to various outbursts on Twitter and his show, Whitlock’s movement against Kaepernick is disappointing for a number of reasons. First of all, refusing to acknowledge the validity of Kaepernick’s protest is willful ignorance. Secondly, to attack Kaepernick’s character during his protest without acknowledging the consistency his words and actions have demonstrated (i.e. continued follow-through on his $100,000/month donation pledge to fight racial inequity) is, again, a conscious decision to be petty and loudmouthed for ratings. 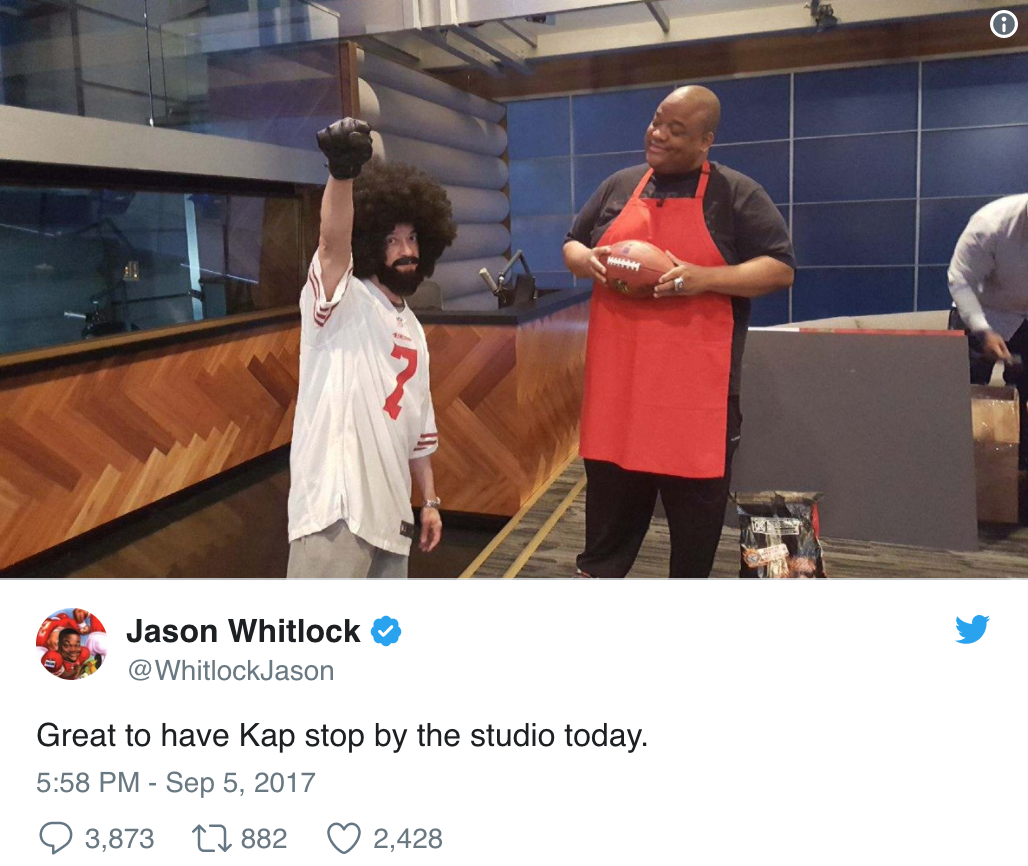 Ultimately, it’s not about the pushback. It’s just how useless and low-level the pushback from many Black men in sports has been concerning this issue. Despite the foundation of appealing to Whiteness that his feedback sat on, Michael Vick’s comments about Kaepernick needing to cut his air to be more presentable have been the most sincere, reasonable criticisms from a prominent Black man of Kaepernick in 2017. Nothing as fair or genuine has come from the self-proclaimed “undefeated” journalist running the “shit-talking corners” for 20 years.

I know, after a section in which I shame Jason Whitlock, I am agreeing with him. But not without acknowledging some key things about Lavar Ball.

What Lavar Ball is also doing, however, is shamelessly upping his personal stock without taking a step back and allowing his sons to live beyond his shadow. Defenders of Lavar Ball clearly support healthy Black families, but they fail to realize that the Ball family isn’t the first NBA family headed by an involved father. Mychal Thompson and Dell Curry didn’t have to flex their career stats or declare the shooting prowesses of sons Klay and Steph to be strong guiding forces in their careers.

How about an even more comparable father-son dynamic? Did Joe Bryant feel compelled to act like Kobe Bryant’s mouthpiece when he arrived at the same Los Angeles Lakers franchise with the same generational messiah-type hype? Didn’t think so.

Lonzo isn’t a media darling, but he’s mature. His even-keeled approach to the volatile ups-and-downs of his first few months as an NBA player has been his personality as long as he’s been on ESPN. What is it, exactly, that he needed his dad for?

I respect Lavar’s attempts to make the commercial world of sports more player-centric, including the recent announcement of the Junior Basketball Association for high schoolers who want to forgo college and aren’t comfortable playing overseas. But for as much potential as his ideas and schemes have, he has an embarrassing personal need for attention (i.e. “I could beat Jordan in my prime”) and a tendency to become even more overbearing toward his children when things don’t go his way (i.e. homeschooling LaMelo, pulling LiAngelo from UCLA).

If Lavar supporters haven’t done so yet, we need to acknowledge the unhealthy patterns Father Ball has been demonstrating ever since riding into fame in a chariot drawn by his three sons. Until he truly does take a step back from the PR stunts and makes a valuable impact beyond getting his sons NBA-ready, our praise for him needs to be withheld.

Kanye was in his 30s and truly about that family life by the time Kim birthed North. But damn, Travis. You really meant that shit on your ‘Love Galore’ verse.

Perhaps it’s not an L, maybe you and your music will change for the better, mature and whatnot. Nothing wrong with loving women that have porn-like dimensions, but I hope the bond isn’t a porn-like facade.

Insecure‘s Lawrence Walker is a fictional character. But his character is undeniably real in today’s world. If it wasn’t bad enough that Issa cheated on him, the end of Season 1 and all of Season 2 used Lawrence’s life as a demonstration in the fragility of the male ego.

First, despite everyone knowing he still cares about Issa, Lawrence can’t bring himself out of self-pity and pettiness long enough to communicate that to her. Between his rude let’s-talk-it-out-nah-fuck-you switch up at the end of Season 1, their cold hit-and-run sex, and resurfaced baggage during a failed date, Lawrence has drowned out his vulnerability with vindictiveness, defensiveness, and sex as a vain booster of confidence which ultimately backfires.

If I was cheated on by a person I was with for 5 years, I’d be devastated. I would be 808s and Heartbreak sad and Yeezus mad at the same time. But as imperfectly as I would deal with that situation, playing with another person’s vulnerability for some indirect revenge is not the way I nor anyone should deal with it. That is why Lawrence deserved every bit of Tasha’s rage after embarrassing her at her family function, summed up perfectly with one of Insecure‘s greatest quotes thus far:

Lawrence deserves time to figure his shit out just like anyone else. But in 2017, he hit uncomfortable (but very entertaining) lows trying to stick his dick into anyone that gives him attention and taking his unresolved Issa feels out on innocent women. Sadly enough, the person who he hurt the most with his behavior was him.

If there’s anything you learned from this piece:

To all the men listed in this article, Merry Christmas! Hold these Ls. But it’s not all shame and clownery. As major 2016 L-taker Jay Z said, “A loss ain’t a loss, it’s a lesson.” I doubt anyone I just mentioned will read this, but you are. So learn from them.