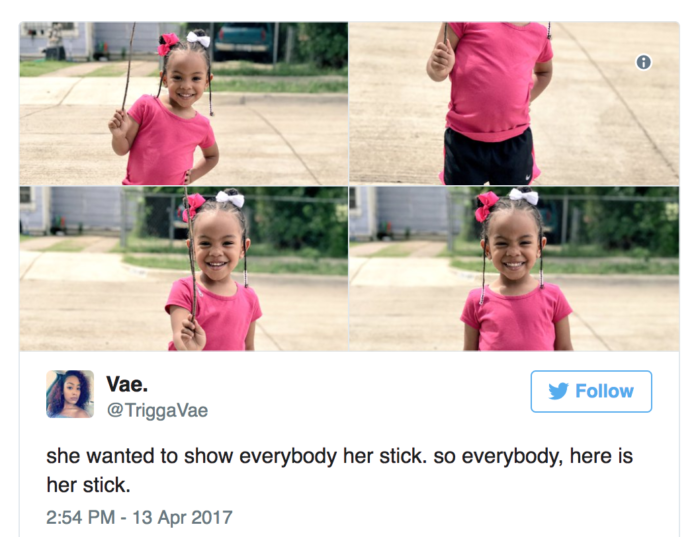 Would you RT this if you saw it on your timeline?

she wanted to show everybody her stick. so everybody, here is her stick. pic.twitter.com/uffJZZFLR9

Would I? Yeah, probably. But why? Do we feel obligated to repost certain images on Twitter like we feel obligated to like announcements on Facebook no matter how basic and lateral a person’s next move—studying abroad, new job with the same pay, you know, shit that doesn’t make you special—might be?

I think the popularity of this pic, and other images of people of color doing slightly above average or sweetly innocent things, are rooted in a good fight. Visual representation of Black youth is limited: you’re either dead or a criminal if you’re a young Black face on the news. Twitter has been serving as a counterattacking space for racial justice, and it’s been a net positive. That being said, why are we so compelled to lose our shit over pictures like this? I mean, look at the comments:

@TriggaVae @BlueEyedZ0mbie YOU TELL HER THATS THE BEST STICK I EVER SEEN AND IM SO PROUD OF HER FOR FINDING IT pic.twitter.com/p8ZhelnHmZ

This little girl and her guardian/mother/older relative are super cute and didn’t ask to go viral. I don’t think the problem is this particular picture or these particular comments. I think the culture of amping the mundane is an issue. The people that prop up the beautifully normal are the same people who damn others to hell for making a mistake frozen in time by a photo or video. The problem with putting an average little girl on a pedestal is that anyone who says or does something unsavory gets the complete opposite treatment.

Simply put, I’m loath to hype these random viral pictures of people doing cute or mildly successful things because of the precedent it sets. Twitter becomes so sensationalized that your daily life experience looks dull in comparison. Seeing all these edited, well-taken pictures of people looking their best makes it seem difficult to find comparable magic in the world. On top of the polarizing effect it has on people, these depictions of people aren’t that real.

Feel me or no? What do you think?