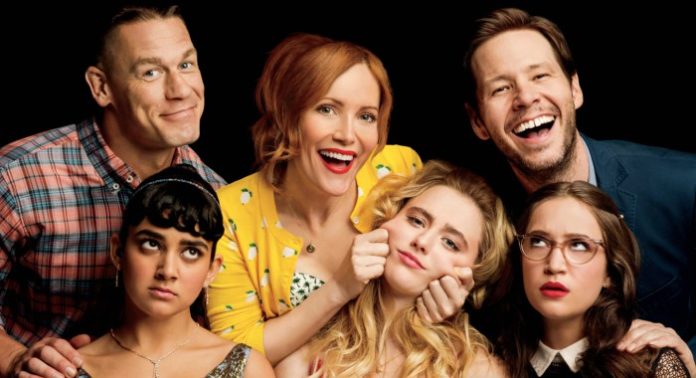 Ike Barinholtz is a professional clown on The Mindy Project. I love him. I also love how pleasantly competent John Cena is as an actor. And there couldn’t be a better woman to play an awkward, possessive, passive-aggressive mother than Leslie Mann. With all of these actors in roles as parents of sexually ambitious prom-going high school seniors, you think all you’re getting is a shit show.

As promised, you get a shit show. Hunter (Barinholtz) is an embarrassing deadbeat dad, Mitchell (Cena) is riotous as a swole, protective yet emotionally sensitive dad, and Lisa (Mann) makes the desperately lonely 40-something mom as funny as can be. The physical humor—including a butt chug and very awkward sex game—is as raunchy as any of Blockers‘ sex comedy competitors. But Blockers also gives you some serious food for thought.

Below is a sample of my Vocally.com piece ‘How The Raunchy New Comedy ‘Blockers’ Managed To Be As Progressive As It Is Funny‘:

Even as gratuitous as the scenes were of one kid’s parents walking around naked and blindfolded, their awkward appearances in the film were a comedic reminder of our society’s double-standard when it comes to the sexuality of men and women: One boy’s parents are totally unbothered and trusting of a kid nicknamed “The Chef” for his connoisseurship in baking a wide variety of drugs into treats; meanwhile, the parents of the lead girls — one in a committed relationship, the other fiercely assertive, and the third one a lesbian — lose their shit at the thought of their daughters being anywhere near an erect penis.

I also think it’s wonderful that a woman — Kay Cannon in her directorial debut — was in Blockers’ driver’s seat. There are plenty of ways in which woman’s perspective benefitted this movie, but there are two in particular that stood out to me, the first being Cannon’s decision to focus more on the parents’ internal conflicts rather than the girls’ sexcapades. It made the humor refreshing since the story didn’t rely so much on physical gags, giving the plot depth so it never got boring. The second benefit of Cannon’s eye was the neat and effective inclusion of some real talk about society’s backward thinking when it comes to female sexuality.

For the rest of the piece, click here! I’ve been honored to keep providing a thoughtful male perspective to Vocally, and I hope my work encourages you to explore the wonderful female writers of the site.

How Self-Aware Is ‘Falcon and the Winter Soldier’?