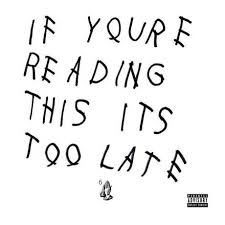 Here’s a breakdown of the reactions to If You’re Reading This It’s Too Late given by critics, fans, and haters alike, with my thoughts to conclude:

Aside from the rabid nature of Drake fans on the internet, additional context such as, but not limited to, the release date being the 6-year anniversary of ‘So Far Gone’ and petty beef with Tyga made this release significant.

Sonically, the mixtape was refreshing to many. Most of the production was handled by OVO/Toronto-based producers who have done well to refine Drake’s sound into a fluid mesh of ambient, ominous and hard.

“Beats switch from industrial percussions to the sparser after-dark effects that have sort of become Drake’s thing.“- Consequence of Sound

Another aspect of the project that was pointed to as a highlight were the more aggressive lyrics and flows used throughout. Acknowledging the various storylines surrounding the release, Ernest Wilkins at Complex Magazine says IYRTITL “…isn’t an album. Nor is it a mixtape. It’s a warning.” He goes on to say more about the tone of the project, saying “I like angry Drake a lot. He’s a natural heel, the snooty kid who knows he has more than you and has no problem admitting that he’s paying $30 million for two mortgages…He sounds like he let loose of whatever was truly keeping him from speaking his mind…”

Given some variability in his flows (heightened aggression in ‘6 God’, ‘Energy’, as well as drawl in ‘Madonna’ as examples) IYRTITL served as a newer, firmer stamp on the “Drake sound” and people were going crazy over it. Some a little too crazy.

Then there’s this guy…

Extremists aside, there were definitely some reasons to be hype about this mixtape.

He could do better

It seems like most people are split between “FIRE” and “This could be waaaay better.” Many of those who critically approved of Drake’s work in the past were not impressed by Drake’s latest effort. Some argued that the project was a step back for Drake and that he has started to plateau or even decline. Many cited a perceived lack of effort as a big reason for the disappointment in the new project.

Given the quality of Nothing Was The Same along with the anticipation surrounding Views From The 6, the frustration regarding Drake’s songwriting is completely understandable. Even with a fair share of quotable one-liners, many songs seemed to stand on the strength of the production, or memorable hooks and melodies (‘Energy’, ‘Know Yourself’, and ’10 Bands’) rather than noteworthy lyrics.

A significant number of both fans and critics had negative opinions about IYRTITL. Along with the perceived lack of lyrical effort, superficiality in the project’s content was cited as a disappointing aspect of Drizzy’s latest offering.

When it comes to lyrics and cohesiveness, this project is lacking. But overall I like IYRTITL given the conditions under which it was put out: Drake called the project a mixtape rather than an album, which leads me to believe that Views is what listeners should consider the “official” fourth installment in Drake’s album discography. For that reason, I was not as concerned about the songwriting or the lack of improvement from NWTS. This project and the short film ‘Jungle’ seem to be an attempt at evoking deeper curiosity about Drake’s world before he drops VFT6. Whether people liked either of the works or not, this project gives Drake momentum and heightens the urgency his fans feel as they wait for Views. Drake did a good job of providing sharper glimpses into his Toronto background with both of the works, which I think is intentional stage-setting for a heavily Toronto-themed fourth album. And if the short film, his previous acting career, and his thoughts about rapping in his 30s (skip to 3:23) are any indication, a greater rollout of content might be coming along with the album.

Drake’s position at the top is precarious. If You’re Reading This It’s Too Late sustains him for the time being and, if everything goes right, serves as the perfect segue into THE project that solidifies Drake’s standing in today’s music scene.