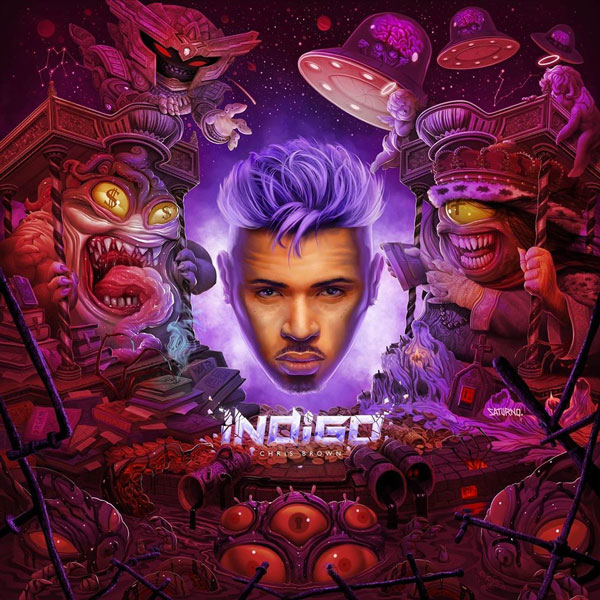 Spare me, Breezy fans: I know Scorpion is a 25-track double-album and Culture II had 24 joints on it. But you know what? People were annoyed by those albums. They also don’t make Heartbreak on a Full Moon (45 songs) and Brown’s upcoming Indigo (37 songs) seem any less extra, even in the age of streaming.

If you’re as stupid talented and popular as Chris Brown, flooding the market with an absurd amount of songs isn’t a bad idea. If Brown was ever considered an album artist, that label stopped fitting him a long, long time ago. Why not stick to your bread and butter knowing you’ll get a few hits and a shit-ton of plays off the strength of sheer volume?

Without further ado, some predictions for Chris Brown’s Indigo based on the tracklist so gotdamn long it took 3 screenshots to tweet it out.

There’s nothing really to say about Brown’s artistic direction. If the song titles are any indication, he’ll be talking about the same things and employing the same sounds he’s been using for years in his music. But Brown on an uptempo, pop-friendly R&B/rap fusion will continue to be a problem. In 37 songs, I’m sure something will be as undeniable as “Privacy,” or infectiously nostalgic yet fresh like the Kevin Lyttle sample on “Questions.”

Despite several successful singles, HBOAFM‘s highest charting single was “Party” at a relatively humble #40. Perhaps that doesn’t bode well for my prediction considering there were even more songs on that album than this next one, but his PR has been steady and there seems to be a genuine interest in Brown’s music again beyond the gossip surrounding him.

Despite the early hype for this one, I’m not buying it. A Drake feature boosting your song’s profile is as close to a guarantee as anything in the music industry today. But not every Drake feature has been the juiced-up short-term stimulus package that his work on “Yes Indeed” and “Look Alive” were. While Brown and Drake are both humongous artists, there’s no guarantee the feature will do anything useful for the song. “Flip The Switch” by Quavo on his solo debut Quavo Huncho, for example, landed at #48 in its only week on the Hot 100 despite Drizzy’s presence.

In a 37-song album, I have a hard time believing each track was treated with care. While star power and timing mean a lot in the music industry, nothing can save a rushed or simply mediocre song. At best, “No Guidance” will be reluctantly trendy because it hits all the right algorithmic spots. We’re all slaves to pop music formulas one way or another.

3. Gunna will have the hottest feature

“Hottest” meaning some combination of the best and most popular.

I know the Tyga-Breezy link-up is on this album. And there’s Drake, and Juvenile, and Lil Jon’s yellin’ ass. But Gunna rips features.

4. He will have at least one hit (top-40 song with staying power) from both sides of the double-album Indigo

Even if we exclude “Undecided” which has already broken the top-40, the variety and weight of his features plus, of course, having dozens of fucking songs, strongly suggests he’ll see chart success with both sides of the album. This would be an improvement from Heartbreak where only one song from Disc 2 (“High End,” #82) charted, and well off the mark to be considered a hit. Even with Future and Young Thug features, “High End” only stayed on the Hot 100 for two weeks and basically went unheard by the masses.

Unlike Heartbreak, Indigo has a healthy balance of features on each disc. Features including Juvenile and Juicy J, Tyga, Lil Jon, and Kid Ink suggest a high energy Disc 1 with club potential. With features like Drake, Tank, and Trey Songz on Disc 2, plus song titles that seem more bedroom-y than dance floor-ready (e.g. “Early On,” “Heat,” “Let’s Smoke”), we might get a more successful version of “Privacy” out of the second half of this album.

There are artists on each side of the album that don’t seem to fit with the other features—H.E.R. on Disc 1 and Gunna on Disc 2, namely—but they’re such exciting young names in rap/R&B their input will probably be welcomed anyway.

5. The song “BP” is literally a reference to the gas station, but as some sexual simile/metaphor

If I’m off, I’ll be way off. If I’m right, it’s a shame how predictable Chris Brown is.

UPDATE 6/28/2019: None of y’all Breezy fans told me this was an acronym for his clothing brand Black Pyramid.

I started this piece wanting to talk shit about Chris Brown having 82 songs on two albums, but ended up interested and hopeful for some good music.