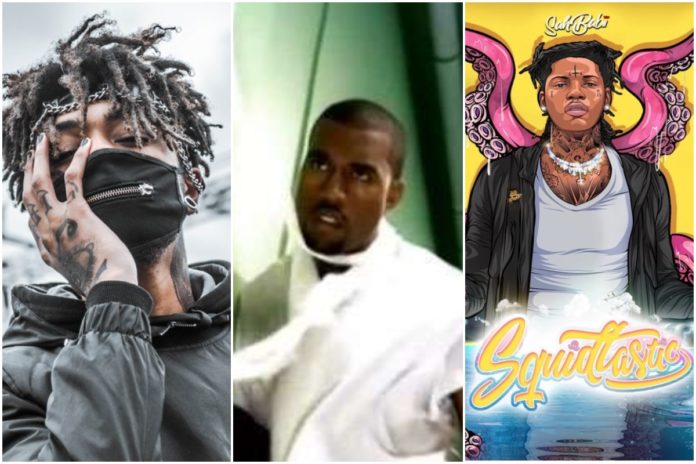 Rappers are influenced by all kinds of social and cultural factors. Any worthy hip-hop fan can name a few artists heavily inspired by comic books, video games, and movies. But what about the influence of Japanese anime on hip-hop?

The appeal of anime to Black hip-hop artists is multifaceted, but at its core is anime’s dynamic nature. Unlike animated shows and films in the West, Japanese culture treats animation as a serious medium to explore topics ranging from juvenile curiosity to very mature topics such as mortality, identity, and what it means to be human. The hyperreal depictions of action and violence definitely attract viewers from the youth-driven culture of hip-hop, and the well-developed characters and storylines ensure the flashiness of Japanese animation gives new fans a reason to connect and come back.

While anime does not have as many artists dedicated to it on the level that rappers like MF Doom and Ghostface Killah were to comics, anime has influenced some notable hip-hop songs and artists from spitters like Denzel Curry to the living legend Kanye West and alternative new generation rappers such as Scarlxrd and SahBabii. Let’s take a look at all the ways anime has left imprints on hip-hop.

To start, let’s talk about the animes that are most frequently referenced by rappers. When a body of work becomes popular among rappers, it can seamlessly blend in with hip-hop culture through consistent name drops and allusions. Popular animes among American rappers include the classic shows Naruto, Death Note, Dragon Ball Z, Attack on Titan, and Inuyasha, as well as the classic 1988 movie Akira.

With Naruto, the appeal lies in the main characters’ special qualities and parallels to gang culture. Abilities such as the Sharingan eye, fighting styles, and hand gestures called hand seals are unique to the different clans in the show. Along with parallels to the enviable parts of gang culture, the narrative of Naruto as an outcast and the action sequences are enthralling. Punchlines based on these Naruto characteristics have been made by a bunch of rappers including Lil Uzi Vert, Robb Bank$, Ski Mask the Slump God, and Duckwrth.

The appeal of Death Note is simpler: the show’s premise is that its main character, Light Yagami, has a notebook that allows him to supernaturally kill someone once he writes their name in it. The late Lil Peep, Denzel Curry, and Open Mike Eagle are examples of rappers who have made Death Note references in their bars.

Dragon Ball Z’s popularity goes without saying, with countless punchlines and references to its famous warrior characters Goku, Vegeta, Piccolo, Frieza, and more being infused in rap since the 1990s. RZA of Wu-Tang Clan identifies with the show so much, he’s gone on record to say the plight of Goku resembles that of a Black man in America, especially the parts about Goku having to rediscover his heritage and hidden Saiyan powers in order to become all that he can be. Dragon Ball Z is so popular, it’s actually strange when a rapper says they don’t really mess with it. In a Pigeons and Planes video series titled “Trending Topic,” Ugly God, a known anime fan, listed his favorite animes including Yu Yu Hakasho and Maison Ikkoku, but surprisingly claims he was never a big Dragon Ball Z fan.

A newer but very popular anime referenced by rappers is Attack on Titan, a show based in a dystopian world where the remaining humans live within a walled society protecting them against giant humanoid creatures called Titans. Xavier Wulf has a song based on the show called “Wulf Titan” and other rappers have made references to the show such as UK Drill rapper V9 in Morrison’s “Shots” Remix (3:19) with the bar, “Ching man’s neck and call him Titan,” referring to a Titan’s only weakness being slashes to the neck.

While not the commercial hits Dragon Ball or Naruto were, Inuyasha is another classic anime that a handful of rappers have referenced in their raps as pointed out by Genius, including Soulja Boy’s “Anime” and XXXTentacion’s entire song “Inuyasha.”

Songs and music videos based on Anime

Similar to the X song “Inuyasha,” rappers have taken their love for anime even further than one-off references on many occasions. Among notable songs and music videos that are inspired by anime, we have to start with Kanye West’s “Stronger” video heavily inspired by the dystopian 1988 anime film Akira. Not only do many of the shots in the music video resemble scenes in Akira, but Kanye West still considers the film as a creative standard to aim for in all of his visual work.

Despite being fan-made, many of XXXTentacion’s early songs gained traction when they were paired with anime clips to give the music beautiful yet haunting visual life. Songs like, “I spoke to the devil in miami, he said everything would be fine,” and “I’m Sippin Tea In Your Hood” were given thrilling visual stories using striking clips from the shows Naruto and The Garden of Words and became popular deep cuts of X’s before he dropped his debut album 17. The intersection of anime culture and young X fans created something new that gave each art form a different feel.

One of the most anime-based hip-hop songs in recent memory is SahBabii’s standout track “Anime World” from his 2018 project Squidtastic. Like many other rappers before him, he drew heavily from Naruto in the lyrical content. But from the chorus to the progression of the verses, SahBabii skillfully immerses the listener into “Anime World,” going so far as to have a spoken Japanese interlude where a girl tells SahBabii he’s the only person who can save a fictional village. With bars like, “I dress like Akatsuki/they copycats, Kakashi” and “Chakra strong can’t stop me,” SahBabii’s “Anime World” is one of the most complete odes to anime and its influence on rappers.

The only way to outdo having whole songs and a discography peppered with anime is to have an artistic persona rooted in it. While rappers such as SahBabii, Lil Uzi Vert, Juice Wrld, Ski Mask the Slump God and Madeintyo all draw plenty of influence from anime, it’s tough to find a hip-hop artist as anime-inspired as British rapper Scarlxrd.

Formerly a YouTuber that went by the name Mazzi Maz, Scarlxrd jumped into music first with the nu metal band Myth City in 2014, then later in his current form as Scarlxrd in 2016 with a style heavily influenced by both heavy metal and trap which he has dubbed “trap metal” in a 2018 interview with Louder Sound. To capture his aggressive, distorted sound with his appearance, Scarlxrd rocks a trademark mask to separate himself from his cheery YouTube persona, a mask worn by the main character Ken Kaneki in the dark anime series Tokyo Ghoul. Scarlxrd also actively uses Tokyo Ghoul audio in his music like in the song “Chain$aw” and uses the Japanese language to do things like spell his self-titled debut album in Katakana.

Conceptually, Scarlxrd’s heavy use of Tokyo Ghoul is very effective in his art. For those who don’t know, the show is about a fictional version of Tokyo where human-like beings called ghouls live amongst humans and can only survive by eating humans. After a near-fatal date with a girl revealed to be a ghoul, the main character Ken Kaneki becomes a half-ghoul after an organ transplant using ghoul organs kept him alive. Throughout the show, he tries to hide his half-ghoul identity to his human friends and has internal conflicts about being in society but having to eat people to stay alive. These dark internal conflicts pop up in much of Scarlxrd’s music, with songs such as “HXW THEY JUDGE,” “BERZERK,” and “DEMXNS & ANGELS.” In “BERZERK,” Scarlxrd raps, “Why does the devil try pick on my soul?/He still hits like a bitch I can kill him and eat him,” in an apparent reference to ghouls.

Even in its beginning with breakbeats from disco and funk music, hip-hop culture has always been about creative reuse of other cultures. Anime’s relationship with hip-hop is an edgy infusion that helps many artists add color and layers to their music whether it’s sampling, references, or visuals. The anime/hip-hop crossover has also led to other artistic achievements such as classic animes being soundtracked by hip-hop like Afro Samurai featuring production from Wu Tang’s RZA and Samurai Champloo featuring the late Japanese hip-hop producer Nujabes.

Cultural exchange between Japanese youth and youth in American and British hip-hop isn’t always perfect, but the ties are strong and rooted in mutual respect and fascination.

Today, the rise of crossover East Asian hip-hop acts like Higher Brothers with songs such as “One Punch Man” will only strengthen the anime/hip-hop connection. And with many of today’s most promising hip-hop acts being heavily influenced by anime and artists being allowed into the world of television, such as Jaden Smith in the Netflix original Neo Yokio, the relationship seems like it will continue to evolve.