Today at the Apple Live event in San Francisco, Apple rolled out some new shit. Among the highlights were the Apple Watch and the new MacBook.

Starting with the watch, it is essentially a small computer with a touchscreen that you have on the wrist. It’s gotta be connected to an iPhone, however, to be fully functional. So it’s a really fancy accessory, at least for now.

The new MacBook upgraded in some dope ways. It got lighter, thinner, has an increased battery life, higher resolution, and some new capabilities in the track pad that allows users to customize certain types of click pressure in order to do certain things.

Apple products have been on for a minute, and they’re not going away any time soon. That being said, here’s a summary of how people are reacting to the new releases.

Many faithful Apple consumers have been thrown into a frenzy over these new gadgets. Regardless of the satisfaction they have had with previous and current Apple products, these consumers are ready to drop everything for the best, the newest. They might slightly exaggerate in their expressions of desire on Twitter, but it isn’t that far off from what Apple fanatics are really like. Honestly though, they look sleek af. Between a smart watch, and a record thin laptop with some new crazy ass Force Touch technology, it’s hard not to want these things. 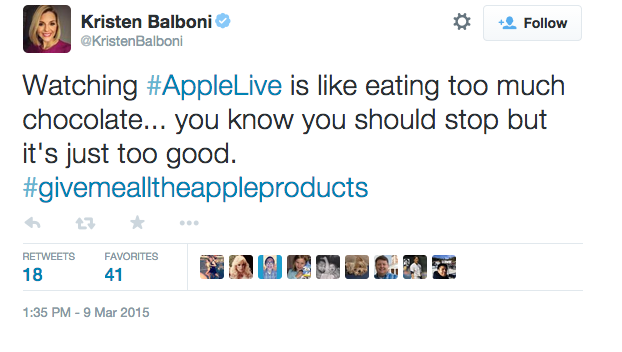 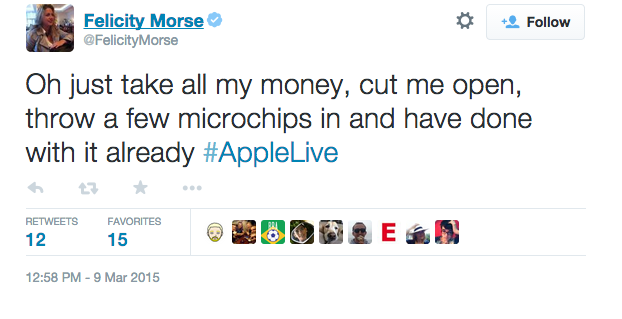 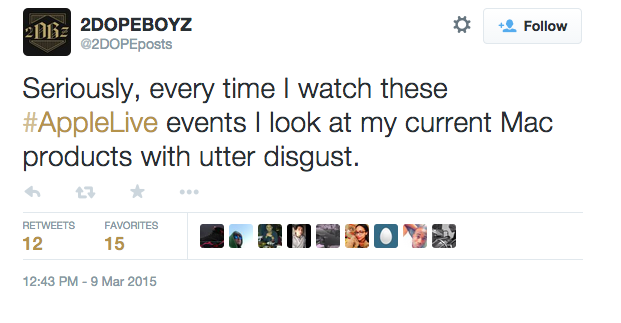 On the other hand, not everyone rides Apple’s dick. 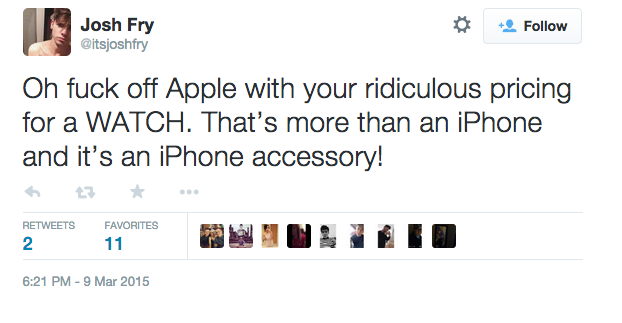 I’ve always been behind when it comes to technology. I’m frugal and do not resonate with the rabid consumerism that Apple customers exude during new product releases. I got my first smartphone in the fall of 2013, a Galaxy S4, and I still have that thing. I’ve always eyed Apple fans and products skeptically: I hate the idea, and the ever-emerging reality, of people having to depend on technology to simply process life. Whether it’s the impulse large groups of teenage girls feel to take a group selfie during every outing, or the ease with which millennials can scroll through an IG or Twitter feed for hours, our obsession with novelty tech products concerns me.

Another issue I have with the craze that surrounds the release of Apple products is the undeniable significance that the products carry as status symbols. At this point it is very clear, even professed by the people quoted in the “WANT. NEED. NOW.” section, that many people buy these products immediately upon release in order to simply keep up with their peers. As far as technological innovation goes, is there really anything wrong with an iPhone 4? My Galaxy S4? Maybe I’m slower when it comes to getting used to my devices, but I still find new uses for my Galaxy S4 almost two years after I purchased it. There’s no real digestion of all the updates and advancements that come with new technology. For many, the chief end of buying these products is to have it and say, “Cool, what’s next?”

All of that being said, I think Apple is doing some great things with these products. However, y’all should relax for a bit. 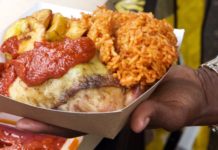 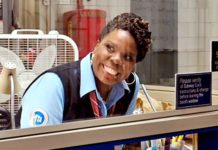 What They Say: Leslie Jones in Ghostbusters 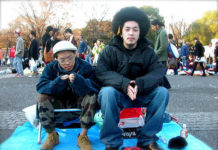 What They Say: Hip-Hop Culture in Japan 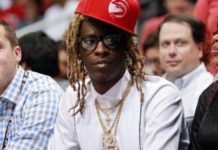 What They Say: Young Thug