Proud to kick off 2020 just how we ended 2019: trying to mainstream environmental information for the gotdamn culture.

Many thanks to Erizon, the Australian environmental company, for allowing us to publish their four-part guide on what to know about how badly the Earth is suffering because of human activity. To end it, we’re talkin’ water pollution.

Without further ado, the last part of Erizon’s wonderful guide to talking about the environment with some sense:

Water covers 70% of the Earth’s surface. It’s a critical resource for the survival of all humans and the environment.

Water pollution goes hand-in-hand with air pollution when it comes to environmental concerns. It affects not just large but also small bodies of water around the world. Polluted water also affects entire ecosystems that exist in the water.

What is Water Pollution?

Water pollution is the contamination of water, which causes a decrease in its quality. Pollution occurs when harmful substances contaminate water. The pollutants make it toxic to humans and the environment.

Numerous types of pollution occur in water. They pose threats to marine life that can result in extinction. We are going to discuss the most common types of water pollution below.

One of the most natural primary resources we rely on for drinking.

Groundwater comes from rainfall that has seeped deep into the Earth. Pollution comes from contaminants such as the pesticides and fertilizers in the soil. These harmful substances reach groundwater making it unfit for drinking. Some cases of polluted groundwater take decades to repair.

Surface water refers to water on the surface of continents such as lakes and rivers. Pollution takes place when some bodies of water are no longer fit for drinking. Water pollution on our surface water has a catastrophic effect on our drinking water. Furthermore, surface water pollution can also make it unfit for swimming and fishing.

The leading type of contamination comes from Nutrient Pollution. These include phosphates, nitrates, and fertilizer runoff.

Extreme cases of pollution can occur when rivers are no longer fit for drinking. This affects our supply of fresh water and makes it challenging to find resources.

Ocean water pollution occurs when streams or rivers bring harmful matters into seas. They carry all the bacteria out into the ocean, which affects the ecosystem.

These contaminants come from different sources such as farms, factories, and major cities. Pollutants of the ocean are usually composed of plastic materials. They reached bodies of water in many ways, either it’s washed in via drains and sewers or blown in by the wind.

Point source pollution comes from a single source of contamination. One example is oil spilled straight into bodies of water. Immediately knowing the cause enables authorities to make prompt countermeasures. Organizations are now establishing limits on industries. They have set standards on the types of substances industries can discharge to the water.

Non-point source pollution is the exact opposite of point source. The contamination comes from a combination of different sources. Having no identifiable culprit makes it difficult to regulate these types of pollutants.

With our resources depleting every year, organizations are creating prevention countermeasures. Pinpointing the common causes is only the first step.

Water comes from many sources that connect many different bodies of water. This makes it challenging to pinpoint the exact cause of water pollution. But, by categorizing them into the most common causes, we can split them into four common types.

Agriculture is the leading cause of the degradation of water. Farming and livestock production use more surface water compared to humans. Whenever it rains, fertilizers and animal waste wash out into our waterways. This makes agriculture the most significant contributor to water pollution.

Water pollution is getting rampant every year. This will take us decades, even thousands of years to do damage repair. If immediate action is not taken, there will be less and less drinking water available for us in the future.

What Can Businesses Do To Help?

Check your regular processes and review if it is possible to cut back on solvents. See if there are machines you can use in a more efficient and responsible way.

Trying alternative materials to cut back on waste is making headway on many companies. But, you should still do proper research before you switch over. Some substitutes may generate a different type of harmful substance to our water.

Try to look for ways on how your company can reuse materials. The most common way is reusing cardboard boxes. The best way to deal with materials that you can’t reuse is to look for off-site recycling.

Set up a designated area where you can collect waste and treat a significant amount. Keeping waste segregated will create considerable cost savings for your company. You’ll increase the opportunity to recycle as well. Also, have a cleanup plan designed if you don’t have one yet and store materials you’re not currently using.

Why Should Companies Care

Ridding Contaminants Can be Difficult

There is no doubt dealing with harmful substances will prove difficult. This is true, especially if you don’t have a proper plan on how to segregate waste. Not only will it cause damage to the environment, but it can also be fatal to people around the area.

One example we can use here is the cholera outbreak in Soho, London, back in 1854. The cholera epidemic was due to water supplied by companies at the time. The Southwark and Vauxhall Waterworks Company provided water coming from the Thames River.

The highly contaminated river caused the lives of 616 people. Microbiologist Hassall described it as “the most disgusting which I have ever examined”. The cholera outbreak in 1854 led to the death of 4,267 people. These people received water supplies from the company.

In 1855, the company responded to the legislation by building new waterworks.

Without proper segregation and illegal disposal, polluted water can take decades to treat. This will cost you more money that is better invested in suitable waste disposal. The ecosystem also suffers from the created chain of cause and effect on the environment.

One example we can use in this scenario is the most massive oil spill known as the Gulf War Oil Spill of 1991. The oil spill damaged the ecosystem in the Persian Gulf, around Iraq and Kuwait. Dousing the oilfield fires cost $1.5 billion and took 1.5 billion gallons of water. Oil sediment remained 12 years after the spill.

Small Steps and A Lifetime Of Prevention

Dealing with water pollution is something everyone should get involved with. These include governments, companies, and local councils. Learning about water pollution (like you are doing now) is the crucial first step to take.

As of today, governments have strict laws to lessen water pollution. Organizations are available to help educate people on how to reduce water pollution. They also share information about the dangers it can cause to our environment. 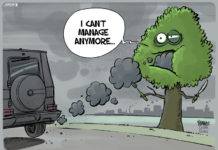